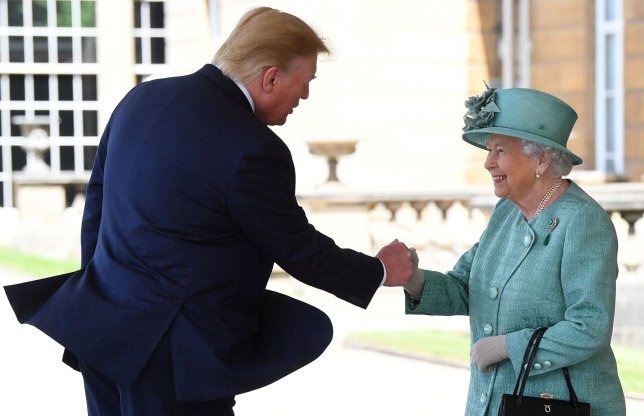 The US President is on yet another state visit to the UK and in true Donald Trump fashion, he’s followed by a string of incidents ranging from the controversial to the downright stupid.

Following the news that he insulted Sadiq Khan and was welcomed by a rather unique message, a new video has emerged of him meeting the Queen. And it looks like he fistbumped her.

Considering he broke all of the rules the last time he met her, claiming that she kept him waiting after walking in front of her, you would’ve thought he’d have learned from his mistakes.

But then again this is Trump we’re talking about and so of course he hasn’t. Here he is greeting her with what looks like the most uncomfortable fistbump ever. What’s good Queeny fam…

What’s your verdict? I’m saying fistbump but according to body language expert Judi James, who pointed out Trump is known for his extreme hand-holding, it looks more like the POTUS just couldn’t get a good grasp on the Queen’s dainty shake.

Donald Trump is more inhibited when he’s shaking hands with the Queen. He was leaning forward from a distance, with a tentative pawing of her hand.

The Queen only ever offers her fingertips so he couldn’t get a grasp. He probably wasn’t touching much more than her fingers.

Because he’s got such huge hands, it probably does look like a fist bump. It’s hilarious – watching the size differentiation between them is comedy gold.

His huge hand was enveloping her tiny one. But she was quite happy, chuckling and laughing.

Well, that’s definitely the less fun option. Maybe none of the above is correct and he was just going in for a thumb war… we wouldn’t put it past him.

For more Trump antics (there are loads), click HERE.