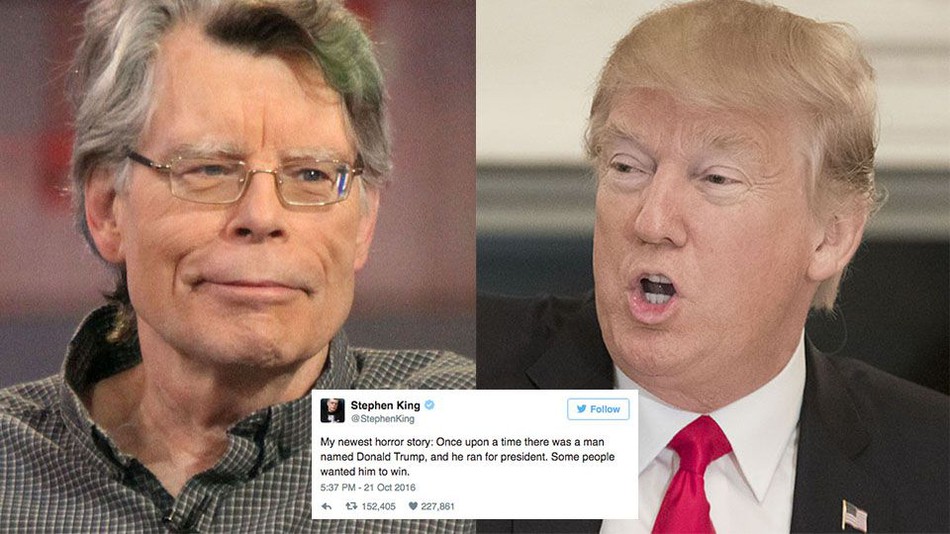 No horror stories for the President.

We ran a story a couple of days ago about how President Donald Trump was blocking people who were criticising him on his Twitter account and it turns out that he hasn’t taken the criticism well at all and has started to target celebrities in his blocking frenzy.

The first of these (that we know about) is famous horror author Stephen King. King has been critical of Trump throughout his rise to the Presidency, comparing him to one of the villains in his novels – which often feature populist demagogues that spread hate and division – and also calling him names like a ‘crazy ranting uncle’ and a ‘rabid coyote with bad hair’.

However, the tweet that broke the camel’s back was the one below, condemning Trump’s recent bizarre televised cabinet meeting in which he pretty much forced the members to give him praise:

Cutting. Shortly after though, King also tweeted this:

Trump has blocked me from reading his tweets. I may have to kill myself.

Ouch. I guess if you play with fire though, you gotta be ready to get burned. And we all know Donald Trump isn’t messing around. Not sure what King is going to do now – maybe write a book about it or something?

For more Stephen King, check out his new TV series ‘Castle Rock’. Should be a good one.