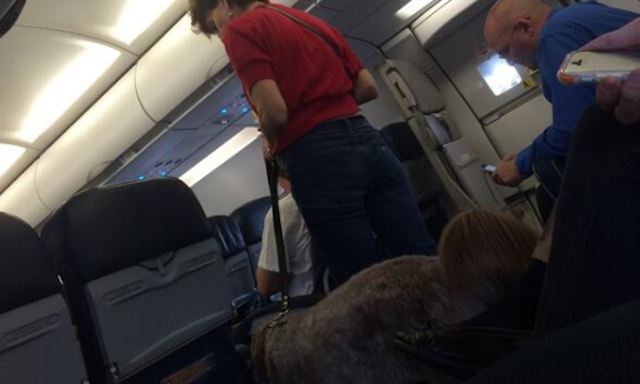 It happened on an American cross country flight from Los Angeles to Philadelpia, with the plane having to make an emergency landing in Kansas City. Basically, as soon as the flight took off the huge dog started shitting in the aisle and continued to do so throughout the flight, with witnesses saying that there were as many as three huge turds emitted from its butt.

Flight attendants ran out of paper towels to clear it up, and the shit was said to be making people sitting near the dog physically ill, so they had no option but to divert the plane to Kansas City and get in the Hazmat team to spray the place down. Seriously. That might sounds like an extreme option, but dog shit definitely isn’t something to fuck around with – there’s all kinds of crap in there, literally.

The dog’s owner was apparently very apologetic over the whole incident stating ‘Hey, so sorry, I want to get all your addresses so I can give you a Starbucks gift card!’ I guess coffee is the way to every American’s heart, so that statement isn’t as crass as it might sound.

Of course, someone live tweeted the whole thing, which you can check out below. The best part is the US Airways response though, which just oozes sympathy. Get a better social media guy guys, seriously.

This flight is the total package. pic.twitter.com/pocuStLh21

So the full sized dog that’s on my flight, well it did what dogs do & went to the bathroom when it felt like it smack dab in middle of aisle – Chris Law (@ChrisLaw) May 28, 2014

Can’t make this up. The dog has now shit twice. Plane is emergency landing cuz ppl are getting sick. Hazmat team needs to board @USAirways – Chris Law (@ChrisLaw) May 28, 2014

@chrislaw Our apologies for your discomfort, Chris.

Easy to crush airlines in these situations, but the flight crew has been great during 1,000 gallon GasLeak/Dog Shit-gate 2014. Kudos to them

I don’t think the dog poop was initial issue, it was more the people around getting sick, a la when Chunk ralphed over the balcony #Goonies

People that use there pets under the guise of “service dogs” who aren’t may be the worst ppl on earth. She & pooch just did walk of shame

With 3.5 extra hours on 2 tarmacs in 2 cities Pilot announced lavatory’s full they now need to empty it. pic.twitter.com/Z7pb1A4yAi

For all twelve of you concerned The flight finally landed… at it’s intended destination.

â˜› More Dogs: Do All Dogs Look Like Their Owners?