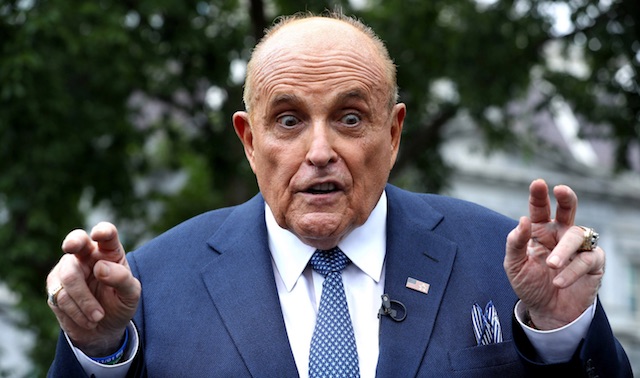 Even more messed up than we thought.

It’s fair to say that the Rudy Giuliani scene in the ‘Borat’ sequel last year – where he seemingly tries to seduce a 15 year old reporter – was one of the most talked about of 2020 and probably would have been even if it was a regular year of movie releases.

I thought we had probably heard everything that we were going to hear about that scene by now, but director Jason Woliner was appearing on The Daily Beast’s Last Laugh podcast over the weekend and decided to reveal a few more tidbits about it as well. Here’s what he had to say:

Well, I was watching it as it was going. I was in a control room kind of hidden right there. And Sacha was hidden in a cubby that we had built into a little closet and he and I were texting because he couldn’t see what was going on.And so I was watching the feed. There were hidden cameras, obviously. So we’re unable to communicate with Maria, but we’re just trying to text with Sacha to determine when is the right time to jump out.

At a certain point it’s not funny anymore. It’s just a sting operation. So we’re texting with him, we’re watching. So they’re doing this interview. He’s saying all these shocking things about COVID and all this racist stuff about Chinese people. And then we have the first beat of it when Sacha comes in as the boom guy and that’s step one. There’s a chance, step one, he sees Sacha in what I think is the most absurd costume of the movie — it could blow up. Rudy could be like, what the f–k is that? And it doesn’t. If we just got that, we could maybe put something together. We didn’t want to just get that, but every step of the way is like, OK, let’s try it again. There was actually a beat that we shot where we pushed in a room-service tray and Sacha was hiding underneath it. We were doing this kind of farcical thing where he’s trying to communicate with her again and we wound up cutting it out of the movie. Again, Rudy didn’t discover anything weird, his radar didn’t go up.

Imagine watching that in real life, a few feet away. And then he lies down and he puts his hand down his pants. My jaw hit the floor. It was one of those moments you never forget. And that’s when we said, ‘OK, Sacha, I think it’s time to go in now.

You know, I’ve been doing this for a long time. I’ve seen a lot of people get microphones applied and removed. I’ve never seen anyone have to lie on a bed and put their hands down their pants.

Yeah, that must really have been something being in there and watching that unfold in real time, although I always think it’s kind of a shame that they didn’t wait a little bit longer so that there was literally no doubt whatsoever about what Rudy was trying to do because as it is now he is always going to say he was removing his microphone and some people are just going to give him the benefit of the doubt. Just an idea for the next one guys but other than that keep up the stellar work.

For more of the same, check out Borat’s daughter’s version of what went down in that hotel room. Seems pretty clear what was going on.