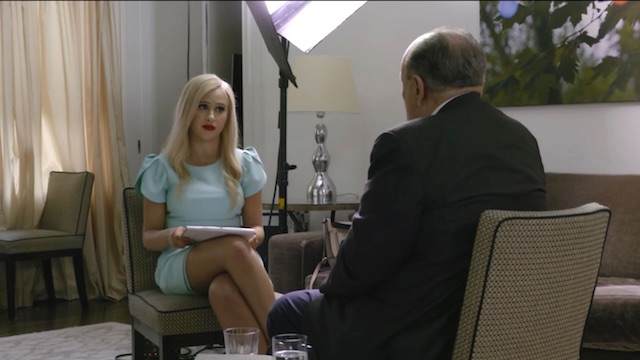 The truth comes out.

‘Borat 2’ – I can’t be bothered to use its full name – hit our screens a couple of weeks ago and the major talking point that has come out of it has been Borat’s daughter’s dalliance with Donald Trump’s lawyer and former Mayor of New York Rudy Giuliani.

It’s been well documented that the scene in the movie ends up with Giuliani messing around with his pants in a hotel room alone with Maria Bakalova – who plays Borat’s allegedly 15 year old daughter – in a move that definitely looks like he’s trying to jerk off over her or instigate sex with her. Obviously Rudy denied this vehemently, but Bakalova herself hasn’t really talked about the incident until a recent profile in ‘The New York Times‘.

Maybe the scene when we were at the hotel and Rudy Giuliani called the police, I was kind of scared that something would happen. But fortunately, we escaped.

I was nervous. My heart was racing. But Sacha was like, you should be nervous in this situation. So use your nerves. Convert them and accept them and they’re going to help you through everything.

I saw everything that you saw. If you saw the movie, that’s our message.

We want everybody to see the movie and judge for themselves…Sacha jumped into the room quickly, because he’s been worried about me.

So, if he were late, I don’t know how things were going to go. But he came just in time.

What do you think Rudy was doing with his pants?

I guess she can’t actually say what she really thinks he was doing because of lawsuits and libel and whatever, but it seems fairly clear by her words that she knows what was up, and it’s what everyone who saw the movie/clip thinks as well. I suppose if you’re Rudy Giuliani then you have to deny it because of your reputation and you have to do so in such a way that you yourself  believe the lie so much in order just to be able to convince other people that this isn’t actually what you were doing, but even then he isn’t fooling anyone. Sad really.

It’s kind of a shame that Sacha Baron Cohen ran in so quickly because then we really would have known what Giuliani was all about and there would have been no denying it either way. Maybe that’s why he did it, but even so you can’t really deny that Giuliani comes across looking sleazy throughout the whole thing, even if it is cleverly edited to convey that.

For more of the same, check out this behind the scenes footage from Borat 2 which shows Sacha Baron Cohen narrowly escaping a gun rally. Dangerous.