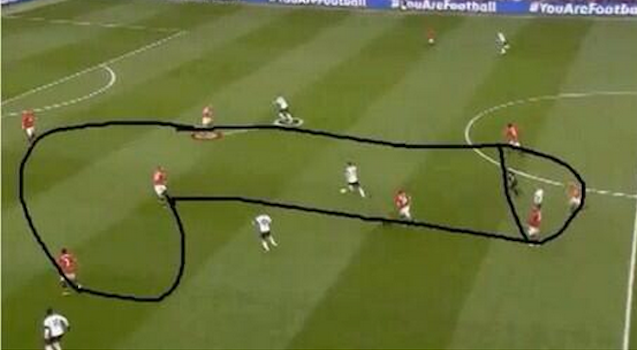 Given the way Manchester United have been playing, these could actually be the tactics that David Moyes is drilling into them.

As the season rolls on and Manchester United’s season gets worse and worse and then EVEN worse, most people can’t look away and are eager to check out their results every week.

Most people are blaming David Moyes’ tactics and the fact that a bunch of the players simply aren’t good enough to wear the red shirt. Tom Cleverley gets a lot of shit, as do Ashley Young and Marouane Fellaini. Nobody can figure out why Shinji Kagawa isn’t playing. Nobody can really figure it out at all really, least of all David Moyes it seems.

As is ever the case when a football team is getting rinsed, a couple of jokers have taken to Twitter to try and explain Moyes’ tactics in these diagrams, which are quite frankly pretty astute at the same time as being absolutely hilarious. Will he figure it out at the Emirates? Only time will tell.

Manchester United: a team based on movement. pic.twitter.com/EMedx9IeNr