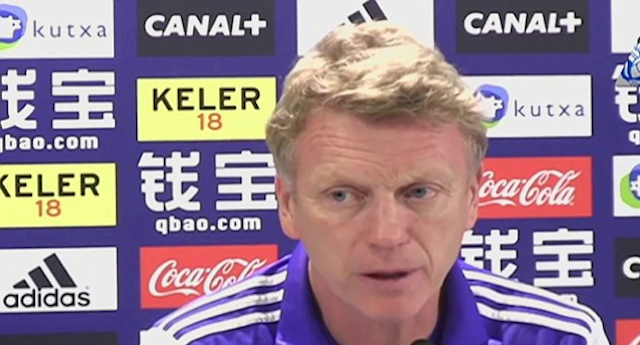 If you’re gonna try and speak a foreign language, you want to do it a little less condescendingly than this.

We’ve really been treated in recent years when English football players and managers go and play in other countries and then conduct insanely bad press conferences over there – who could forget Steve McClaren’s Dutch accent or Joey Barton’s French accent? – but David Moyes’ effort might be the most embarrassing one yet.

As you might have heard, David Moyes has taken over as the manager of La Liga side Real Sociedad in an attempt to rebuild his career after the debacle of his tenure in charge of Manchester United. Obviously a good idea to win him favour with the locals would have been to learn some Spanish or Spanish phrases for his first press conference, but the genius didn’t do that at all – instead he just decided to drop in a few Spanish words during his English press conference.

Obviously this makes him look like a complete dickhead, and it’s even worse when you find out that the words were ‘uno, dos, tres, qautro’ when he was describing how many times he had seen the B team train. Truly cringeworthy and destined to be repeated until the end of time, even if by some miracle Moyes actually manages to achieve anything over there with Real Sociedad.