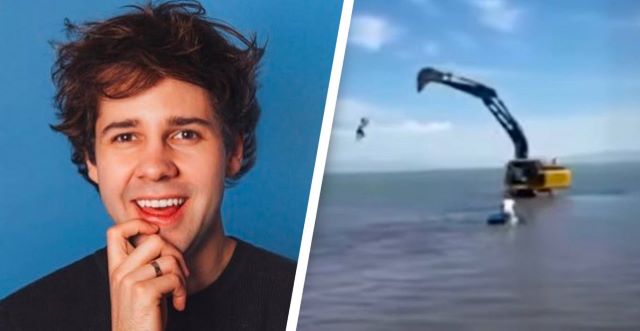 For the uninitiated, David Dobrik is probably the most popular guy on YouTube. He has three accounts with tens of millions of subscribers, makes quick vlogs of him and his friends messing about, and has been doing that for YEARS. He’s 24 years old and worth around $20 million already.

Recently, he’s come under fire for some of his and his friends’ behaviour in old videos, where they would basically get plastered, break shit, hurt themselves, hook up with girls etc. He came out and apologised about that, saying even he doesn’t agree with the stuff he did 5+ years ago. But since then he’s been hit with a number of sexual assault allegations, including filming women having sex without their consent, plus allegations of disrespecting/bullying people, and I guess he’d have been ‘cancelled’ by now if he wasn’t so massively popular.

Well anyway, this week one of his buddies released footage of the day David Dobrik almost killed him, and now he’s catching some grief for that as well:

Well, from the sounds of it David Dobrik is a bit of a scumbag to say the least, but I’m not sure if he’s fully to blame for the incident in that video. I mean surely this Jeff Wittek guy knew what he was signing up for when he joined David Dobrik’s vlogging crew in the first place? The whole point is to do crazy shit for views. He literally says himself in the video:

I just jumped out of a plane 20 times. What’s the worst that could happen if I swing from a rope over a one foot deep lake?

Which means he basically knew something was going to go wrong sooner or later, but kept agreeing to be involved anyway. How’s that necessarily David Dobrik’s fault? Did the Jackass boys ever blame Johnny Knoxville for all the pain and suffering they chose to endure?

Well, either way, David Dobrik sounds like a real dick so I don’t want to stick up for him too much. Just saying in this particular situation I can’t see how he’s at fault. Here are some random clips I found detailing all the other drama that’s now coming back to bite him:

David’s MCN is trying to remove this clip from the internet. This is straight up sexual assault and he did it to him twice. Absolutely infuriating to hear him talk about it so joyously knowing the trauma it caused Seth. pic.twitter.com/bXdpYvJFlp

For the time David married his best friend’s mum just to piss him off, click HERE. OK, that was funny.