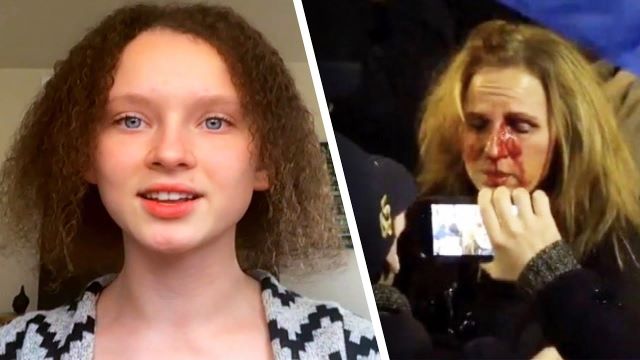 It can’t be easy having wildly different political views from the rest of your family, but if your mum was one of the pro-Trump bozos causing trouble over in Washington last week, would you grass her up on camera and out her to the world?

It was an easy choice for young Helena Duke from Boston:

Damn, as if being punched in the face and bleeding out on national TV wasn’t bad enough, her own daughter then names & shames her and baits her up in front of the world. Helena must have watched that police lady bust her mum’s nose and thought “I’ve been wanting to do that my whole life!”.

Pretty wild to then pull the old “this you?” meme on her own mum and share the screenshot online. But I guess that’s what can happen when you don’t make an effort to understand and relate to your own daughter, even if you’ve got opposite viewpoints of the world.

Well anyway, seems unlikely this teen is going to have a healthy relationship with her mother ever again, though according to her it sounds like they haven’t had one for a very long time. I mean if your mum is a hardcore Trump supporter and you’re the type to go to BLM rallies, then that’s never going to end well, is it? Unlucky, mum!

For another Capitol Hill rioter who was sacked after wearing his work badge during the chaos, click HERE. Smart guy.