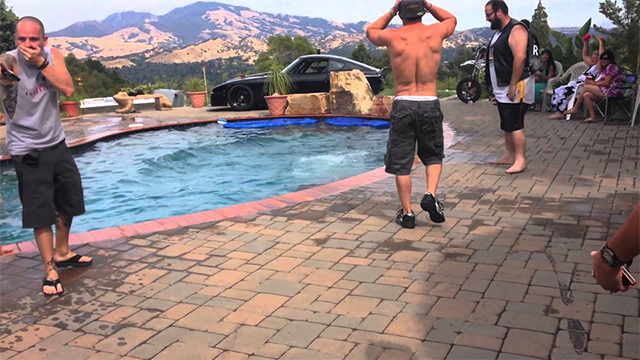 Only the best parties have guys pulling wheelies in the backyard by the swimming pool.

One day, I want a Sick Chirpse party to end up like this, only obviously not with my motorbike.

Stunt rider Darius Khashabi thought he would show off at this sick house party by grabbing his motorbike and pulling a wheelie all over the backyard. Only thing is, things didn’t quite go according to plan as he ended up crashing it into the swimming pool and looking like a total tool. Who cares though I guess because it’s a pretty sick video.

This was a sentiment echoed by Khashabi himself who said:

‘I’ve done wheelies in my back yard for 11 years, this is the 1st time I’ve crashed. I couldn’t care less about the haters, it’s a f**king epic video!’

The best part though is that the Honda CBR he crashes into the pool was brand new and had never been raced or redlined before as well as looking the part with its new wash. The fact that Khashabi doesn’t give a fuck makes the video ten times better, and also makes Johnny Borrell look like even more of a twat.