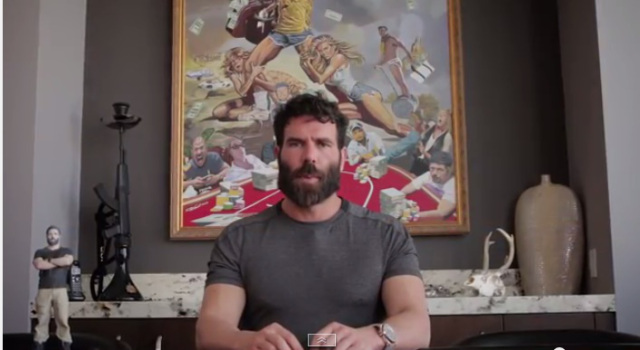 He had to record this as part of a plea bargain, but that didn’t mean he was going to act like he was enjoying it.

Dan Bilzerian has been pretty quiet on the scene this year after he was dealing with the legal ramifications of his action last year when he kicked a woman in the face and got arrested for trying to make a bomb on private property somewhere in Nevada. Why was he trying to make a bomb? Just so he could see it explode obviously.

It turns out that in order to get out of the bomb charge, he entered a plea deal which meant he didn’t have to appear in court for his ‘misdemeanour charge of negligently failing to extinguish a fire in the open after the explosion in question’. He was fined $17, 231 for the cleanup costs – which let’s face it is peanuts to him really isn’t it? – and then ordered to record a PSA espousing the dangers of shooting guns and making bombs irresponsibly. Like you can ever really do either of those things responsibly anyway.

In typical Dan Bilzerian fashion, he held off from recording it for ages and then uploaded it yesterday on April Fool’s Day. In it, he is quite obviously reading from a script and shows no emotion or interest in what he’s saying, is sitting at a desk with an action figure of himself, in front of a portrait of loads of people playing poker and he even inserts a clip of him firing a massive gun that leads to a massive explosion. No worries – he’s obviously taking that really seriously. To be fair, I don’t know what other reaction the United States government expected when asking him to perform such a PSA.