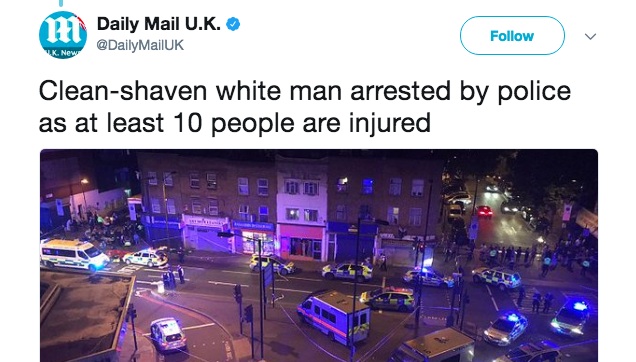 Someone’s getting fired for this.

London has seen tragedy unfold yet again after a man drove a van into worshippers close to the Muslim Welfare House in Finsbury Park, London.

One man tragically died while 10 were injured and it is being treated as a “terrorist attack”. A man has been arrested on suspicion of murder and the Metropolitan Police Commissioner Cressida Dick said that the incident was “quite clearly an attack on Muslims”.

The first media reports were wary of describing the attack as a terror incident, as they waited for more information to come in. However, the Daily Mail sent out a bizarre tweet where they described the attacker as a ‘Clean shaven white man’.  They have since changed the headline, but their original take on the incident received a lot of criticism.

Clean-shaven white man arrested by police as at least 10 people are injured https://t.co/LUPrhpeSi5

It didn’t take long for the Twitter community to chime in with their criticism of the “double standards” of the Daily Mail and ask for the “clean shaven white male community” to condemn the attack, much like it often happens with the Muslim community:

When will the clean-shaven white male community condemn this attack?

BREAKING: man tries to kill people based on religion, thought he was a terrorist but turns out he's clean shaven https://t.co/cSixnV8RhW

Clean shaven? Why not freshly showered? Or bright eyed? Disgusting.

As a clean-shaven white male, I condemn this attack on behalf of my people #FinsburyPark https://t.co/zZgxvqaiuc

Nice one Daily Mail – something tells me someone is definitely getting fired for this.

For more Daily Mail blunders, here’s the time they got sued for £113 million by Melania Trump. Whoops.