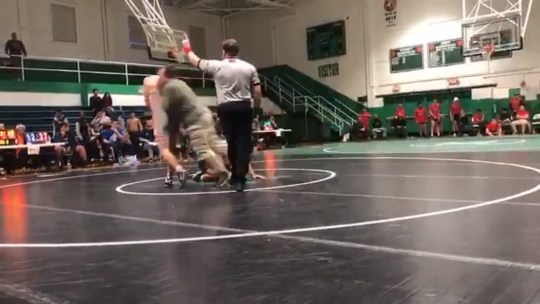 It’s pretty much a given that a father is going to support their children in their endeavours no matter what, but you’ve still gotta know where to draw the line – as this video shows.

If your son is gonna try and be a wrestler, it kinda goes without saying that he’s probably gonna get his ass kicked at least a couple of times, even if he doesn’t get beaten. If you’re a father watching on in the stands I guess that might be difficult to deal with, but you’ve really gotta be able to bite your tongue and not react to seeing your kid getting the crap kicked out of him because when it all comes down to it, it’s a sport and everything that’s going down out there should be within the rules.

The vast vast majority of people would adhere to these unwritten rules of society, but unfortunately there’s always one and this time it’s 54 year old Barry Lee Jones from Hickory Ridge in North Carolina. Barry was watching his son wrestle at his high school when his opponent pulled out an illegal move that he did not like at all, causing him to stand up and launch himself at the poor guy right in the middle of the gym.

Thankfully someone caught the incident on tape:

Oooof. That kid was no expecting that was he? Apparently the student wasn’t injured, but Barry has now been charged with simple assault and disorderly conduct and is currently being held on a $1000 bail.

Probably not the best decision he’s ever made, especially as the video has now gone viral and aside from the assault conviction he’s probably going to receive, he’ll also never ever live it down. Let this be a lesson to everyone.

For more of the same, check out this guy getting smacked with a Ric Flair chop in real life. Yeowch.