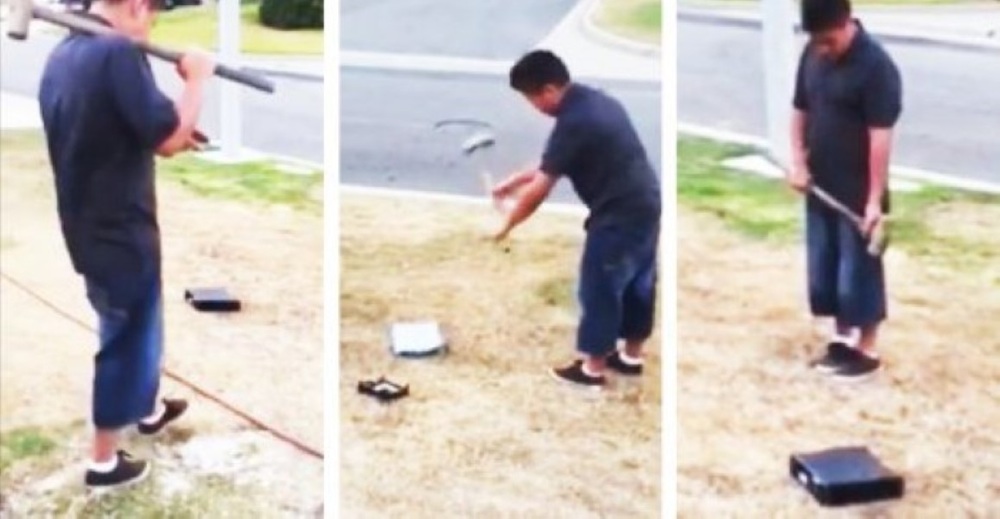 When you’re a little kid, you probably spend a hell of a lot of time playing video games because let’s face it they’re super fun and really entertaining. I know I spent a lot of time with my N64 playing games like Mario Sunshine, Goldeneye and Banjo Kazooie  and I imagine it’s similar for kids now – only this time they’re playing games like Mortal Kombat X or Ark: Survival Evolved.

However, despite all the time that I would spend playing video games my parents always made sure that I did my homework first and studied loads so I didn’t flunk out of school, which was definitely a good thing in retrospect. Even if I did get bad grades though – don’t worry, I never did – I doubt they would ever have punished me like this kid’s dad is punishing him.

After a particularly disappointing set of grades, this little dude’s dad made him take his X Box consoles out into the yard and smash them with a sledgehammer. Ouch – there’s no coming back from that one. It’s a bit lame though because he only smashes one of them in the video and refuses to smash the other one and breaks down crying like a little wus saying that he can’t over and over again.

It SEEMS like the dad forgives him and doesn’t make him destroy the second one, although the video cuts out before there’s any real reconciliation so we’ll never be 100% sure I don’t think. It seems like the little squirt pulled out the waterworks and got away with it though. The oldest trick in the book.

Still, even though this is pretty much the definition of tough love I would have liked to have seen this kid have to smash both his X Boxes. I dunno what this dad is trying to teach this kid, but teaching him to back down and not see things through isn’t going to do anyone any favours.