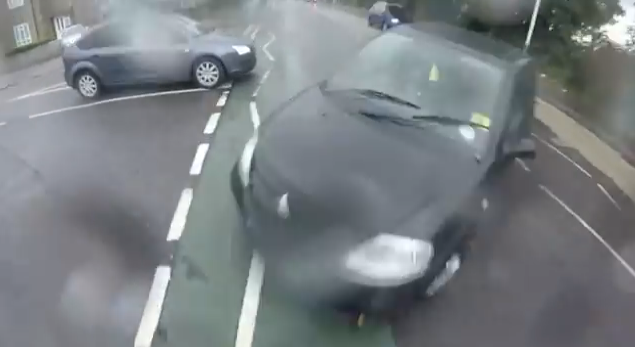 What this London cyclist shouts before he lands is absolutely priceless.

Everyone knows that you’ve gotta be careful riding your bike around London, because not only do you have to worry about people having sex with it, you’ve also got to be careful of other road users. It was only a few months ago that someone opened a door into my housemate’s path and he ended up with his leg broken in two different places, through no fault of his own.

That’s much like the situation that this cyclist finds himself in this video, only he gets out of it a lot better than my housemate did. The guy is cycling into London from Romford in order to ‘build some fitness’ when a woman completely misses that he’s there and ploughs straight into him, sending him flying into the air. Amazingly though he manages to land with his butt on the bonnet and slide straight off onto his feet and escape with only minor bruising. Lucky.

‘The second time I rode into London in an effort to gain some fitness, rather than take the train, ended like this.

I was travelling around 22mph through Romford. Drizzly conditions so I was being cautious around bends and roundabouts. I didn’t expect this!

I just about got my hands to the brakes (it can just be seen on the frame before impact) but I had no chance of stopping.

I’m not quite sure how I wasn’t seen. I’m over 6ft and was wearing a bright blue jacket. If I was seen then it’s a very bad judgement in my speed.

After a very uncomfortable trip to the hospital in a neck brace and spinal board and various x-rays I escaped with just bruising. So I consider myself lucky.

At the time the driver was apologetic and was informed by the police that I was recording my ride and seemed to admit fault. But when it came to my insurance claim against her she disputed it. Safe to say the video has saved me a lot of hassle and 3 weeks later the cheque has already arrived from the insurance company.

My 4 week old Giant bike was written off but thanks to the guys at Cycle Store they put me one of the two they had left aside and I’m looking forward to getting back out there.’