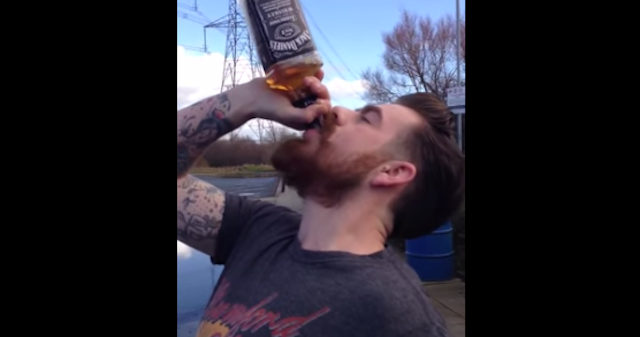 You can taste the Jack Daniels by just watching him do it.

How do you describe something like this? The title says it all – for me it’s hard enough to do a couple of shots of whiskey so I’ve got no idea how this guy can do this without even gagging slightly.

What an absolute hero. Just have to hope he isn’t dead after doing that because he’ll surely be paralytic after about 20 minutes from drinking so much whiskey. In fact I doubt I’ve even ever drank that much whiskey in an entire night out. Soft I know, but still.

His name is Will Williams and he’s from Wales and that’s pretty much all we know about him. I guess he managed to upload this video so he must still be kicking it, but damn that’s a lot of whiskey to be downing in one. Still, it’s not really anything on Mr Shoenice downing a whole bottle of vodka without using his hands, is it? I mean Will had to strawpedo it for fuck’s sake – that’s pretty soft in the downing game.