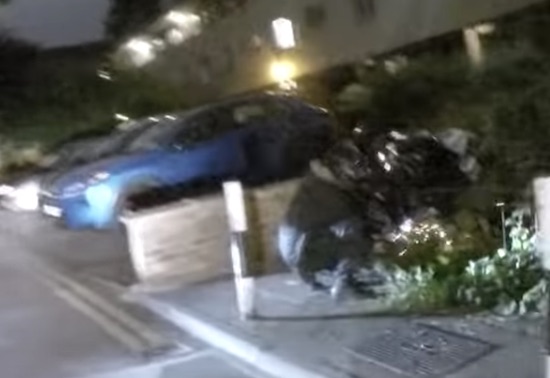 The state of London right now.

22-year-old London courier Omar has a serious set of balls on him – risking his own life in Shepherd’s Bush this week to stop two machete-wielding moped chavs from stealing a bike using an angle grinder.

Whilst out working as a courier I was on my last dispatch in this housing estate when I noticed sparks coming from a parked motorcycle! I Immediately knew it was thieves and parked further up the road, I confronted the thieves with a tool I quickly grabbed from my motorcycle which helps me unclip the box from the main bike. without that I may well have been stabbed for daring to foil the thieves theft attempt. In retrospect  I probably wont confront thieves in a quiet area again. But Im still committed to putting pressure on them when and If I can.

For those who say why I put myself in danger I will say this, before I even started engaging thieves I have been stabbed in the hand and kicked at over 40MPH whilst getting chased by them. My point is whether you engage them or not as long as you ride a motorcycle which I choose to do you will encounter them.

What a legend. Omar now wears a stab-proof vest on jobs which is probably a sound idea given the state of London at the moment. It’s a good job we’ve got people like him around.

For a satisfying video in which a newsagent fights off a machete-wielding robber with an even bigger machete of his own, click HERE.