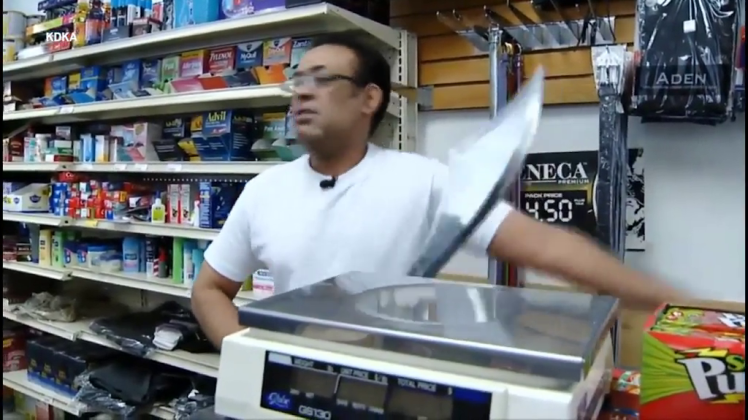 You call that a sword?

I suppose if you’re working in a convenience store then you’re going to always be aware of the fact that it would be pretty easy for someone to rob you and so you’re gonna need to come up with some kind of contingency plan.

I never would have expected it to involve a giant sword though like the guy in this video from Pittsburgh, Pennsylvania. In the video, a guy runs into the shop to try and rob it with a machete, but the shopkeeper reacts quickly by pulling out a massive scimitar before engaging in a sword fight with the wannabe robber, eventually fending him off and out of the store.

Yeah mate, got a way bigger sword than you there no worries. I wonder what the hell went through his mind though when he decided he was going to carry around a huge sword to protect himself from robbers. I mean why don’t you just buy a gun or something – it’s not like it’s that hard to do in America is it? Weird. I suppose we wouldn’t have this video if he hadn’t done that though so fair enough.

The shopkeeper’s brother, M C Hydare, said of the incident:

I just want to give a message to them: Don’t try this. You can have money in a better way. Not this. Please stay away. Go and find work somewhere.

Hmm yeah, I’m sure that’ll work and anyone who ever thought about robbing a shop won’t do that after reading his statements. Inspirational work from him there.

For more swords, check out this guy trying to slice a watermelon in half with a sword but destroying his table instead. Dummy.