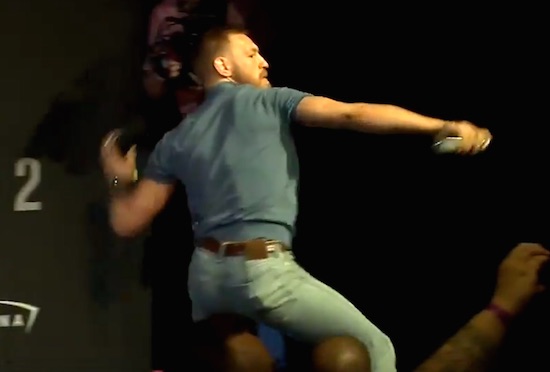 Getting ready for their fight on Saturday.

The Conor McGregor/Nate Diaz hype train is in full effect this week, with the rematch finally going down this Saturday night in Las Vegas and things really reached the next level when the two sat down for a press conference last night.

Yeah, I’m not really sure what that was all about? I mean sure Nate walked off but I didn’t really get why Conor was getting so angry about it and what Nate and his boys were supposedly saying they would do?

Still, it was entertaining and it looks like these two genuinely hate each other ahead of their fight on Saturday night. Was it just me or did Conor kinda look like he was about to cry when Nate was swearing at him on his way out? Kinda seemed like he was actually scared of him a bit which probably isn’t going to turn out well for him when they step into the octagon on Saturday.

Fuck it, I’m calling a Nate Diaz win. If you want to watch the entirety of their previous fight, click here.