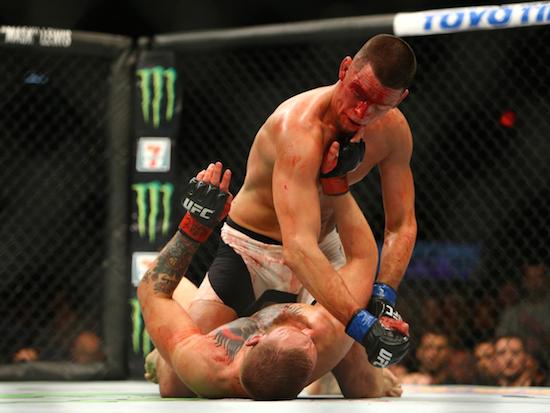 Get informed before the rematch of the century.

Ahead of their rematch in a couple weeks at UFC 202, the hype train for Nate Diaz V Conor McGregor is in full effect.

To pump people up even more, UFC have just uploaded the entirety of their first encounter onto YouTube and it’s already had about a million plays in a couple of days. I’m sure many of you will have seen the highlights and pictures from the fight but not all of you might have seen the whole thing so now’s your chance.

Personally, I don’t remember watching it because I stayed up until about 6 a.m. to watch it getting completely wasted with some Irish guys so it’s nice to have a refresher of it too:

Brutal. That left hand really clocked McGregor eh, but I suppose we all knew that already didn’t we? It’s interesting to see how Nate just sat back and waited for him to come at him so he could smack him on the counter pretty much the whole fight though because he knew he was tough enough to take anything Conor could throw at him – I wonder if those are the tactics he’ll employ next Saturday?

For more on the hype train towards this fight, check out Nate Diaz creeping up on a bunch of people talking shit about him and scaring the crap out of them.