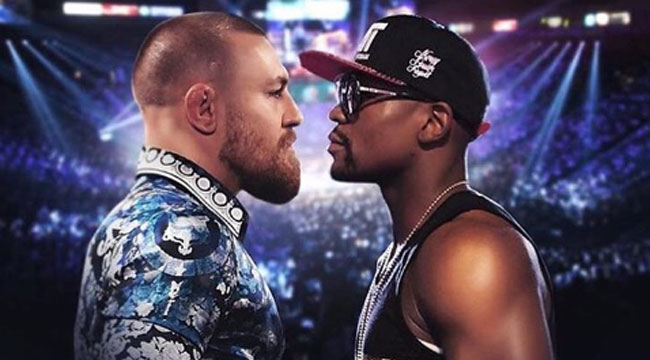 This really isn’t ever going to happen.

Despite the fact that one is a retired boxer and the other is a currently active MMA fighter, the talk of a fight between Conor McGregor and Floyd Mayweather is never-ending, and following on from Conor’s history making win on Saturday it’s been reignited yet again.

After Floyd dissed Conor the other day, Conor has come out and said that he’s willing to have a boxing match with Floyd – for a price. Of course, this price is absolutely obscene and means that the fight is even less likely to happen so we can all continue to talk about it for years to come.

Speaking at a UFC 205 afterparty, here’s what the Notorious had to say:

Floyd’s not ready for this! Much respect to Floyd, he’s a solid businessman.

But as far as real fighting? As far as true, pure unarmed combat? Floyd don’t want none of this!

Tell Floyd and Showtime I’m coming. Tell him to go to them Showtime offices.

I want $100 million cash to fight you under boxing rules cause he’s afraid of a real fight.

So there you have it, all you need is $100 million for Conor to step into the boxing ring with Floyd Mayweather. Of course, Floyd will probably need to make $700 million off the fight because he’s obsessed with making money and being the big shot, so you’ve got to factor that in, but that shouldn’t be too hard should it?

Yeah, you’re right, this is never going to happen but that isn’t going to stop the trash talking for the next ten years is it? With this footage of Conor sparring a world championship boxer out there though, maybe that’s not such a bad idea.