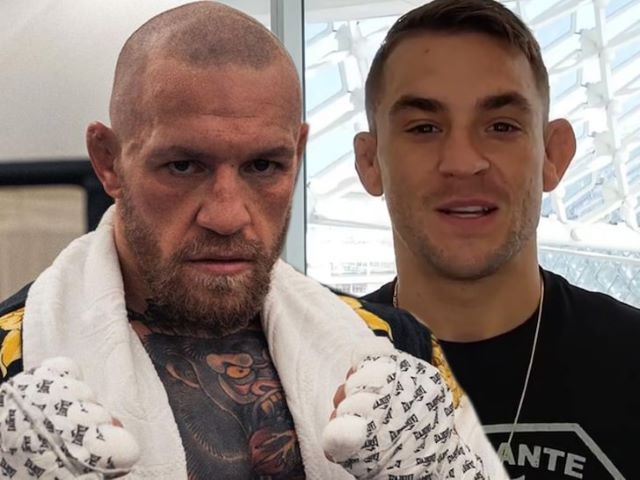 Who wins the trilogy fight?

Earlier on, Conor McGregor shared some highlights of the Dustin Poirier rematch (basically all the clips he looked good in) on Instagram, alongside some honest and insightful thoughts on the fight.

I enjoyed racking up some more time inside the famed UFC Octagon. 40 seconds in 3 years is all I’d had up to this bout. I was savoring every second and enjoying my work. A little single disciplined in my approach and stance with mostly boxing. It’s what I get for picking this bout and opponent as a precursor to a boxing match against Pacman. I deserved to get the legs kicked off me going in with this thinking. This is not the game to play around with. Besides this tho my shots where sharp and I was in full control. Albeit the leg attacks where building up on me throughout the course. 18 in total thrown at me, with the final one buckling my leg fully, that was that. The peroneal nerve compromised.

Fascinating! First time to experience it. Then a tremendous finishing flurry by my opponent. Hats off! A well fought fight by The Diamond. 1 a piece now with a Trilogy bout for all the marbles! Wow! Exciting! Not a trilogy I was expecting, nor the tactical affair I was anticipating, but I’d be lying if I said this wasn’t meant to be. This is exactly how this was always meant to be! Buzzing!!”

It was great to see Dustin Poirier immediately co-sign a third fight to complete the trilogy, now that they are 1-1.

Reading McGregor’s breakdown of the fight, I’d say it’s pretty accurate. He basically admits his tactics were too boxing-oriented, which allowed Poirier to obliterate him with leg kicks over and over again, until McGregor’s peroneal nerve was completely dead and led to him getting dropped him the second round.

It seems recently that a lot of MMA fighters are using leg kicks attacking the peroneal nerve, and to great effect. As far as I know it doesn’t really do any lasting damage to the fighter, but in the moment your leg just completely stops working and you basically have to fall over and accept defeat, which is what happened to McGregor.

Interestingly though, he doesn’t seem too upset about the loss. I mean he obviously got paid very handsomely, but still. He was actually fighting really well until his leg gave out, landing a whole bunch of those brutal shoulder strikes he’s added to his arsenal recently, grappled well, and even Poirier admitted in the post-fight press conference that he was so rocked at one point that McGregor could have probably finished him if he had realised.

Let’s hope the trilogy fight happens before the end of the year, which I guess is still the biggest fight for either man now that it seems Khabib has no interest in returning. Maybe it’ll be for the title this time? One thing’s for sure – I wouldn’t count out either of them on the final showdown. Can’t wait!

For a look at the 140-pound female fighter who KO’d a 500-pound man in Russia, click HERE. No wonder Bellator have signed her up.