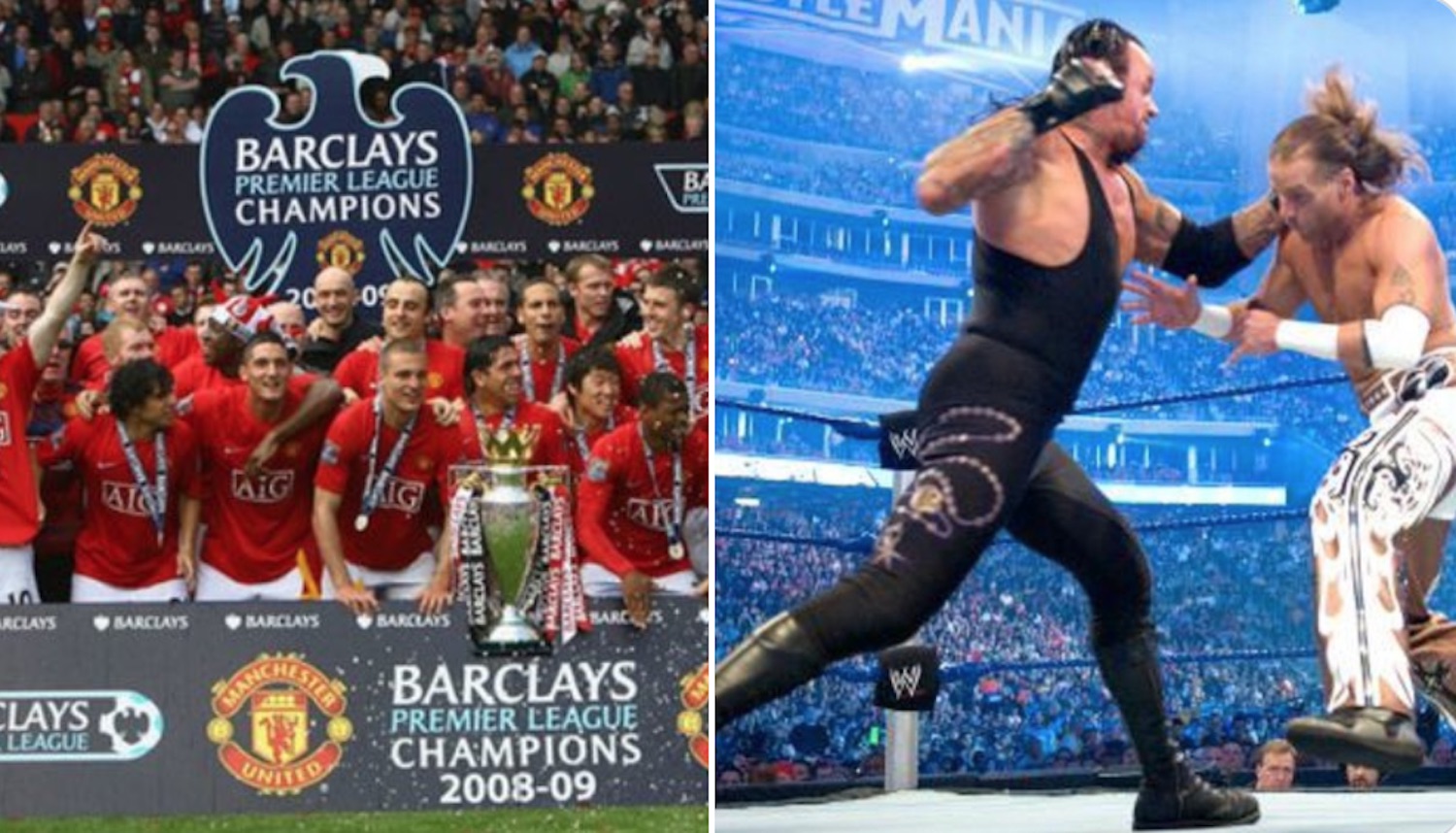 If you’re from the UK and were a kid at the turn of the 00s, then there’s no denying that two of the biggest icons of popular culture were definitely Manchester United and The Undertaker, but I don’t think I’ve ever stopped to consider just how parallel their careers seemed to run. I mean why would I?

Thankfully though, someone on Twitter has seen fit to compare their two careers and it’s actually scarily accurate. Take a gander and see what you think:

Alex Ferguson joined in 1986, but it would be 1990 before he lifted his first silverware at United with the FA Cup.

Mark ‘Undertaker’ Calaway made his wrestling debut in 1987, but it would also be 1990 before he hit the big time. Debuting at WWF’s Survivor Series event. pic.twitter.com/NXBLl0yTmj

91 would also see United capture the European Super Cup too, as well as the start of ‘The Streak’ – Undertaker’s incredible winning run at WrestleMania. Started off with victory over Jimmy ‘Superfly Snuka’ at Mania 7. pic.twitter.com/j8drIwo6ZM

United would have an incredible period of domination the mid-90s, winning nearly everything they played for. Success in Europe was more difficult to come by though.

Again though, neither’s domination couldn’t be kept up. Undertaker lost the title at that year’s SummerSlam to Bret Hart, whilst United surrendered the league to Arsenal.

1998 would be one of only two trophyless seasons that decade for United. pic.twitter.com/di3bhchLQj

In 2000, both Sir Alex Ferguson and The Undertaker remarkably came to the exact same realisation – the competition around them was getting stronger. To compete with the very best, they had to adapt.

Mixed success followed. Undertaker remained near the top of the card, even capturing the Undisputed Championship, beating Hulk Hogan at Judgement Day 2002.

It never felt quite the same. pic.twitter.com/kSoaeYkHu7

2007 would be the turning point. A long awaited league title for United, and a first World Title in 5 years for Undertaker. pic.twitter.com/gsGWlp0z1p

They were dominant forces once again. United won 3 consecutive league taitles (appearing in another CL final too) whilst Undertaker put on a string of some of the greatest WrestleMania matches ever seen, against Shawn Michaels & Triple H. pic.twitter.com/VA1AyvEccR

2014 is where it all goes tits up. David Moyes is appointed and United endure their worst season in decades. Years of aura and intimidation gone in a matter of months. pic.twitter.com/Q9XysnGaBi

Undertaker would keep wrestling, with occasional highlights, but was a shadow of his former self.

Man United would keep playing football, win the odd trophy, but never the big one. pic.twitter.com/l8d9Alayhp

Lol love that last comment – so much shade thrown at Manchester United but you can’t say that they don’t deserve it. Same can probably be said of The Undertaker as he hobbled through the last few years of his career, but at least he went out on a high after this year’s weird Boneyard Match against A.J. Styles. Crazy how similarly their relative careers panned out though hey?

RIP to the deadman. And Manchester United as well lol.

For more of the same, check out when The Undertaker was spotted in Nando’s. Lol.