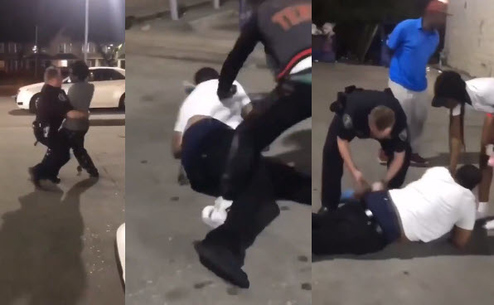 Well that was unexpected.

With all the anti-cop sentiment around America and prevalence of ACAB (All Cops Are Bastards) rhetoric following the news cycles of recent months, the last thing you’d expect to see on your timeline is a video of a whole neighbourhood ganging up to help out a struggling police officer.

This cop was having a hard time detaining his man and ended up getting flattened in the middle of street, but rather than allow the crook to make his getaway, the community jumped in to save the day:

This was completely unexpected. The community helped a police officer detain a violent perp. pic.twitter.com/5S3nyzaMSN

Beautiful stuff. If that’s what people mean by ‘community policing’ rather than questionable ideas like abolishing or defunding the police then I’m all for it. Big man in the white T-shirt even had a knee on the criminal’s neck at the end of the video. That could have made things a bit awkward so fair play to the girl in the red shorts for pushing him off almost immediately after.

As for the police officer, I’m sorry but he looked like he had absolutely no clue what he was doing. Lucky for him these citizens stepped up and helped which could have been more to do with their own knowledge of what a scumbag the criminal is rather than their willingness to protect the police. Either way – back to the police academy for that cop I think.

To watch a pair of criminals in Brazil who were handcuffed to each other make the most pathetic escape attempt in history, click HERE.