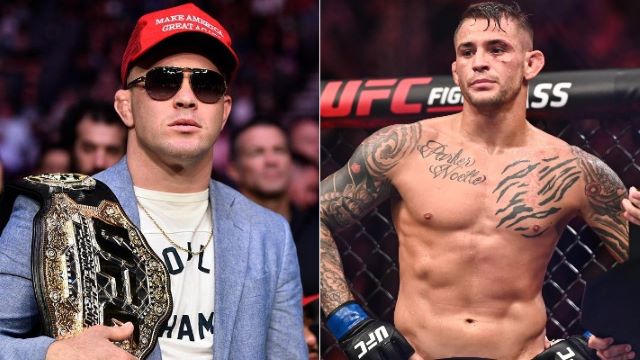 Colby Covington has reignited his beef with Dustin Poirier ahead of Poirier’s third clash with Conor McGregor this weekend.

Colby Covington has reignited his beef with Dustin Poirier ahead of Poirier’s third clash with Conor McGregor this weekend, releasing this video of ‘The Diamond’ dropping a sparring partner and ‘celebrating’ over him.

The guy wearing full nerf gear head to toe to protect his face and his feelings is Poirier. The guy with no headgear, wrestling credentials or brain cells left is “khabib.” @DustinPoirier Good guy? Bad guy? You be the judge👨‍⚖️ #AndNew #UFC264 pic.twitter.com/EMMFwC2b4E

Colby had described the video as Poirier knocking out an amateur sparring partner and celebrating obnoxiously over him, telling MMA Fighting:

I have a video of him knocking out an amateur in the gym, and he’s celebrating, dancing around, yelling in the guy’s face. Dustin, who are you trying to impress? Dude, it’s a closed practice. You’re knocking out a guy that came to help you, and it’s an amateur.

You knocked this kid out, gave him a concussion, left him senseless, his head’s shaking, you’re yelling in his face. What does that mean? Dude, you’re not a UFC world champion. You’re training for Khabib – this isn’t Khabib. … You’re in a closed practice.

Beating a guy that’s a humble amateur that came to help you out for your training camp, and you’re going to concuss this guy? And you’re screaming in his face, ‘And new,’ and ‘Woo?’ Dude, this guy is not what everybody says he is.”

In reality though, it just seems like normal sparring footage? Poirier drops the guy, walks away and yells out “And new”, trying to envisage success in the fight he was training for. Plus the guy he dropped isn’t some “humble amateur” like Colby suggests, he’s a pro fighter with 20 wins on his record…

Glad people can now see for themselves the way Colby Covington described the Dustin Poirier sparring video in our interview was misleading. Nothing out of the norm.

Also worth noting that was not an amateur fighter he was sparring with, nor was it in the Khabib camp. Carry on.

In fact the sparring partner in question, Felipe Douglas, already told MMA Fighting he had no issue with Poirier’s behaviour during or after the fight…

It was an intense sparring session, and things like that can happen in sparring. There are some people saying I wasn’t wearing gear, but there was no reason to wear training gear, because Dustin trains well. He’s not mean. He hits hard like a fight and caught me and knocked me down. The cornerman took me off the cage and didn’t let me go back.

As far as his celebration, people saying he was making fun – that’s the mindset of a guy that is fighting for a belt. I didn’t consider it disrespectful. I don’t do it, but that’s his mindset, envisioning the fight. He was about to fight for the belt. That’s his life.

No one else seemed to have an issue with it either…

Anybody who thinks Dustin did anything wrong in the sparring video has never spent time in a gym before ha.

First and foremost, what a professional backing off, secondly, headgear is a CHOICE. show me a video where Poirier is telling/forcing his sparring partner to NOT wear head gear, then he’d be a douche. https://t.co/g8O7X5oGcn

Recently, Covington also accused Poirier of starting a charity solely as a tax write-off, in an attempt to further tarnish his former teammate’s image…

What a hater! I’m sure Conor McGregor is loving it though as any kind of distraction for Poirier will surely work in his favour as they prepare to fight this weekend. I think even Conor would admit though after watching this video that Poirier isn’t a dick, he’s just sparring like everybody else. Can’t wait for their showdown in a few days time.