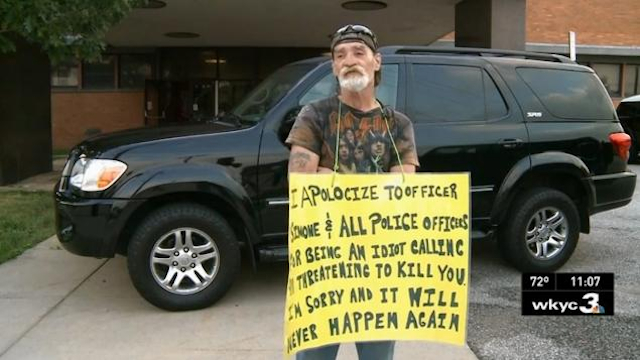 Judge Pinkey Carr doled out her unusual style of justice again this week when she made a man stand outside a police station wearing a sign saying he was an idiot.

Last year we bought you a story from Cleveland in which a woman was forced to stand around wearing a sign saying she was an idiot after she drove on the pavement near a school in order to cut some time.

Well the judge who sentenced her – the amusingly named Pinkey Carr – is up to her old tricks as she’s ordered another dude to stand outside the police station for three hours a day for an entire week wearing a sign saying that he’s an idiot after he got drunk and called 911 threatening to kill police. Bet that seemed like a good idea at the time.

The dude (who kinda looks like a cross between The Dude, Donny and Walter from The Big Lebowski) is extremely apologetic about the whole thing and swears that it will never happen again. Richard Dameron, 58, offered the following statement:

‘I apologise for everything I’ve done, you know. I do feel bad about it ’cause the man has never done nothing to me. I was under the influence of alcohol and we were very deeply into it and we just started rambling off, acting like fools with a couple of officers.’

Remind me to watch how much I drink when I get older. On another note, is Pinkey Carr onto something with these public shaming punishments? Let us know what you think.