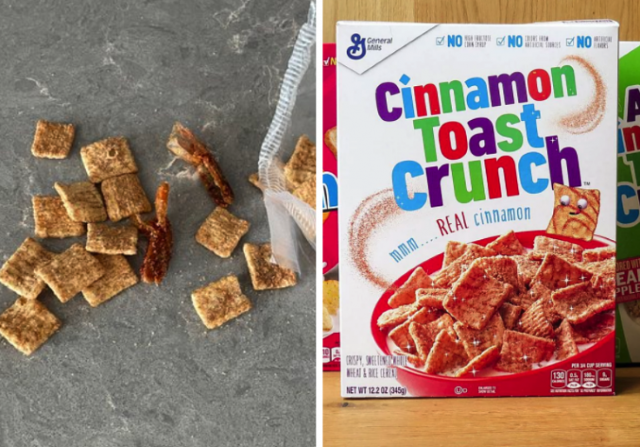 In one of the most absurd cereal-based stories since a Labour MP claimed Coco Pops were racist, a man has called out the makers of Cinnamon Toast Crunch on Twitter after finding what appear to be ‘shrimp tails’ in his cereal box.

US writer and comedian Jensen Karp initially posted this Tweet:

Ummmm @CTCSquares – why are there shrimp tails in my cereal? (This is not a bit) pic.twitter.com/tTjiAdrnVp

The Tweet went mega viral and CTC were quick to respond:

We’re sorry to see what you found! We would like to report this to our quality team and replace the box. Can you please send us a DM to collect more details? Thanks!

Now I think we can all agree those definitely look like shrimp tails amongs the delicious pieces of Cinnamon Toast Crunch in Jensen’s photo, but CTC had another explanation:

After further investigation with our team that closely examined the image, it appears to be an accumulation of the cinnamon sugar that sometimes can occur when ingredients aren’t thoroughly blended. We assure you that there’s no possibility of cross contamination with shrimp.

Um, that’s possible, I guess? Unfortunately for CTC a bunch of shrimp chefs/experts then turned up in the comments saying that the brand is full of crap and that those are definitely shrimp tails:

Been eating shrimp for 20 years. Considering I only like shrimp. I’ve worked with food. The last 14 years. Do you know how many shrimp I’ve had to peel and wash for a catering order 😭 these ARE shrimp tails. How you just lie like nobody had shrimp before.

As if things couldn’t get any worse, Jensen emptied the rest of the box’s contents and found more shrimp tails, amongst other things:

I was convinced to go back through the bag, since when I first noticed the shrimp tails, I freaked out and closed the box. Here’s all my findings, which also now includes a weird little string? pic.twitter.com/mRDUhqG3I8

What a disaster. It only got more painful from there as Jensen shared a screenshot of his DMs with the brand: 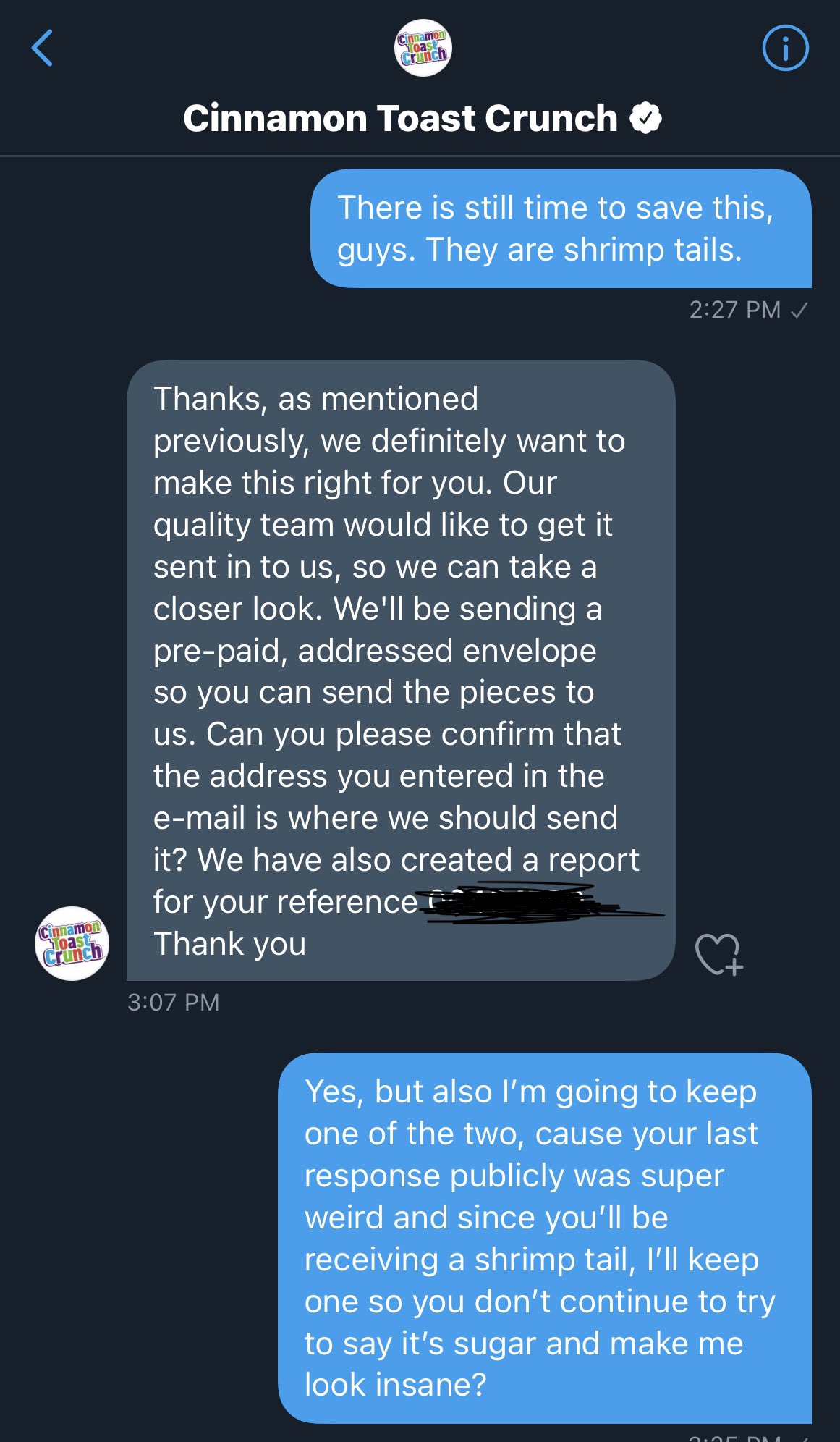 Deary me, what a disaster. I guess we’ll have to wait and see how this plays out. Are those really shrimp tails (as they appear to be) or an accumulation of sugar as insisted by the people at Cinnamon Toast Crunch? If it’s the former, how do shrimp tails even find their way into a box of Cinnamon Toast Crunch? Was the production line worker enjoying some shrimp on the clock? Those production lines do move very fast to be fair, so who knows what can happen when you’re not being careful.

At the end of the day though, you’re probably doing pretty well as a company when only 1 out of the hundreds of millions of boxes of Cinnamon Toast Crunch you have ever released have shrimp tails in them. That’s not a bad ratio at all, all things considered. Maybe they should have just owned up to it instead of trying to gaslight old Jensen here. As they say – shit happens. Might’ve been better off accusing Jensen of putting them in there himself.

For the man sentenced to 10 months in prison for urinating on a Kelloggs cereal conveyor belt, click HERE. Thought mine tasted a little funny this morning.