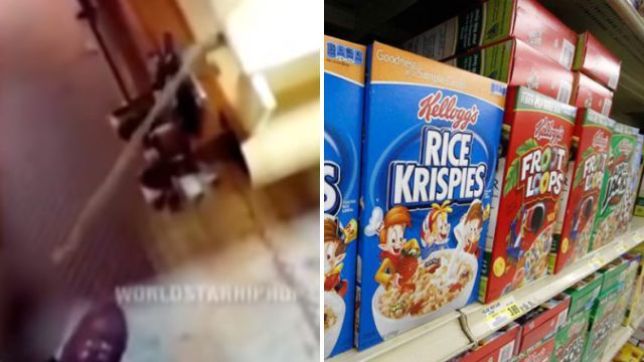 A Tennessee man has been sentenced to 10 months in prison for urinating on a Kellogg’s cereal conveyor belt at a Memphis facility.

49-year-old Gregory Stanton was a contract worker at the Kellogg’s plant in April 2014 when he recorded a video of himself urinating into a bucket and dumping the contents into the production line. He also recorded himself doing it a second time a month later.

The genius even shared the footage online, which ultimately led to his dismissal and arrest:

Apparently there was a nasty labour dispute between the company and workers union at the time. I mean I can understand hating your job and trying to stick it to the Man, but that shouldn’t really apply in certain jobs. Teachers, doctors, police officers, cereal production line workers. Eating cereal in the morning should be one of the safest parts of your day. The fact this lunatic is pissing in our cereals just shows a blatant disregard for human life. It’s just chaos for the sake of chaos.

If a waiter wipes your steak on his ballsack, you might have done something to deserve it. But the idea of getting a mouth full of piss with my cornflakes all because this guy isn’t happy with his Kellogg’s contract is just outrageous. Bring back the electric chair I reckon. 10 months just isn’t enough.

To read about the cereal addict who munches 13 bowls of cereal a day, click HERE. Statistically the most likely to have slurped Gregory Stanton’s urine.