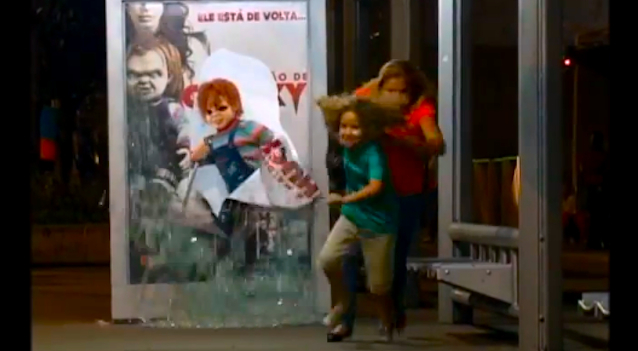 This could be one of the most horrifying and terrifying pranks we’ve ever featured.

Over in Brazil, the production company that devised the almost as terrifying corpse in an elevator prank last year have come up with the goods yet again in their promotional activity for the recently released (straight to video obviously) new Chucky movie ‘The Curse Of Chucky.’

Obviously their modus operandi was again to scare the living shit out of unsuspecting members of the public, and they chose to do this this time by having a prankster dressed up as Chucky jumping out at people who were innocently waiting at a bus stop at night. Chucky would then burst out of the poster of his own movie and chase the bystanders – including young children – with a knife down the street, which must have been particularly upsetting for the young kids, but hey I guess that’s show business.

It’s pretty funny to watch this back for us, but considering I had a bunch of nightmares from just watching Child’s Play when I was a kid, I dread to think how these kids are going to react having actually been chased by a Chucky doll that’s way bigger than the original.