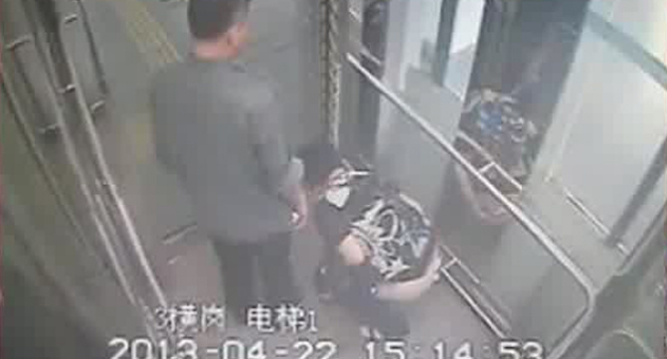 I don’t think I’ve ever needed to take a crap so bad that I would do it in public, but if I did I don’t think I would choose to do it in an elevator, no way.

This is great. We often feature a lot of dumb stuff happening in weird countries – primarily Russia and Japan – here on Sick Chirpse but I don’t think we nearly feature China enough, especially if they are doing crazy shit like this all the time over there. Get it, shit? Heh heh heh.

Anyway, bad jokes aside this is kind of freaky and completely weird and unnecessary. There have been many, many times when I’ve been absolutely bursting for a slash or a crap or even to puke and I think in every single instance I’ve managed to find somewhere acceptable to do the deed. Sure, acceptable might mean up a corner of the street or a bathtub or a kitchen sink (these are more for the puking and pissing problems, not the shitting one) but the point is that even someone with as little self restraint as me can still manage to solve these situations in ways that aren’t going to offend anyone too badly, or at least make whoever’s house I’m in too mad. You’ve gotta keep it together, you know?

Clearly, over in China people don’t seem to think that this is as important a character trait as I do over here, or maybe it’s just this one woman – and her husband (!) – who don’t think it’s that big a deal because I guess the fact that the video is going viral means it must be considered pretty outrageous behaviour over there too. Basically, this Chinese woman gets caught short on her way down to the subway in an elevator, so squats down and takes a dump right there and then right in the elevator.

My favourite thing about it is that her husband fully condones and supports her actions. He’s in the lift too and stands in front of her whilst she’s letting it out so that nobody can see her through the glass windows. If that isn’t true love, I don’t know what is. Shame he forgot about the security camera.

It’s also pretty impressive how she doesn’t need to wipe and just stands up from her squat and leaves the elevator like nothing happens. If I was caught short like this (and I’d like to stress I don’t think this would ever happen ever, unless someone slipped me a laxative or something) I think my biggest fear would be that it would be a sloppy one and crap would just go everywhere and I would stink of shit and it would get it all over my clothes and it would just be completely gross, and for that reason I probably wouldn’t attempt this. This woman looks like she knew exactly what she was doing though and just let it out all natural style and with minimum fuss, kinda like she does it all the time. Maybe this is just the first time she got caught?

Amazing Footage Of A Chinese Sinkhole Swallowing An Unlucky Passerby