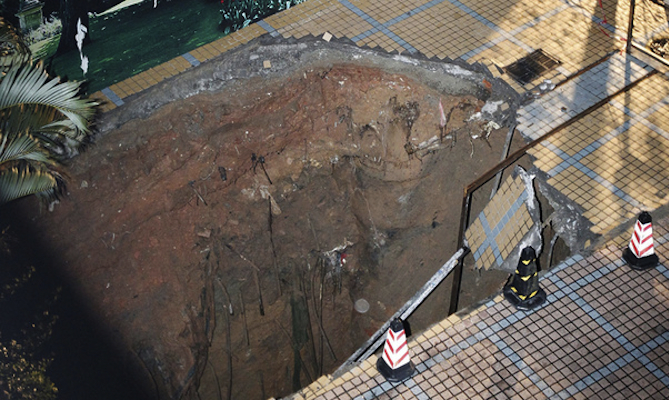 Sinkholes are fucking scary. Imagine just walking along and then boom, there’s no ground anywhere around you and you’re falling into a massive pit. That’s exactly what happened to this guy.

UNLUCKY! This is probably one of the most unlucky things that could ever happen to anyone ever, mainly because there is absolutely nothing you could do to avoid it, unless perhaps you’re geeky enough to look at geology maps and try and predict when and where sinkholes might occur. I don’t even know if geology maps would even help you do that – and that kind of sums up my point about how you can’t really do anything to avoid it, because the average person doesn’t even know if you even can avoid it. Sinkholes are just scary, and that’s the bottom line. And they’re happening all over the world, in no small part to rapid and poorly planned development.

This video came to light yesterday of a Japanese security guard called Yang Jiabin. He was walking along minding his own business  in Shezhen, China, when suddenly a massive sinkhole opened up and swallowed him. The hole was 26 foot wide and 52 foot deep and was said to have been brought on by heavy rains in the region. Although rescue workers arrived at the scene fairly quickly, unfortunately Yang didn’t make it after falling 52 feet and was pronounced dead at the scene. That’s probably the roughest of rough breaks, like I said at the start of the article.

Amazingly, despite the fact that the dude died, the footage that was caught on two CCTV cameras in the area was quickly edited and uploaded to a Chinese sharing site called Youku, which is probably the Chinese equivalent of Reddit or something. Whoever edited it together also added a really hokey soundtrack too which makes the whole thing seem like a really bad version of 24 or some other inane drama, which kind of detracts from the fact that you’re watching a man’s final moments. I’m not sure if I’m cool with that or if the very fact that this has been added makes this OK to watch and not feel too bad.

Anyway, check it out below and make your own mind up.

â˜› Woman On Motorbike Nearly Crushed By Lorry In India

â˜› The Best Of Russian Dashcams