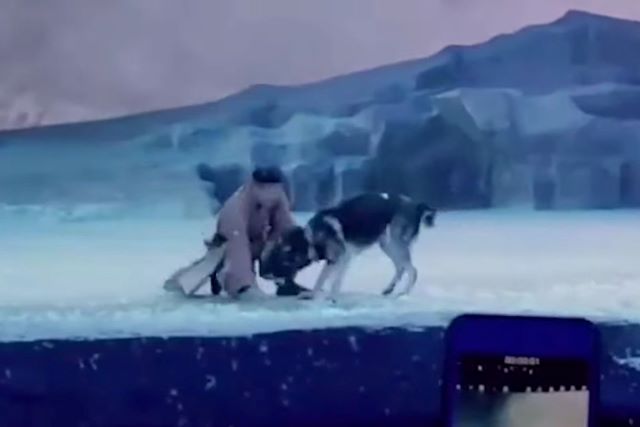 What could go wrong?

Viewers are raising safety concerns in China over a play which sees real-life wolves chasing actors through the middle of a crowded theatre in Xi’an.

Footage of the play — titled ‘Tuoling Legend,’ or ‘The Legend of Camel Bell’ — shows wolves pursuing performers across the stage and ‘attacking’ them without any leashes or safety harnesses, which looks like a disaster waiting to happen really.

Can’t lie – that looks awesome. I’m not much of a theatre guy but if you’re saying I can watch actors get chased by wolves and get pretend-mauled on the ground like that then take my money every time. Apparently there’s protective nets between the stage and seats, so it’s not like the wolves can dive into the crowd and rip you to shreds; it’s just the actors who are at risk of that.

Can’t believe they’re actually playing out fight scenes with the wolves on stage though ffs. According to one representative, it’s no big deal (via The NY Post):

The wolves have been domesticated for three to four generations.

They are legally raised and trained by professional trainers with certifications since 2018 and no accident happened in the past three years.

Love the assurance there. You just know you can take China’s word on it when it comes to things like this, right? Definitely won’t be any follow-up stories involving any Chinese actors being mauled to death on stage in front of horrified onlookers or anything. No sireee.

For a horrific video in which a wolf-pack singles out and attacks its lowest ranked member, click HERE.