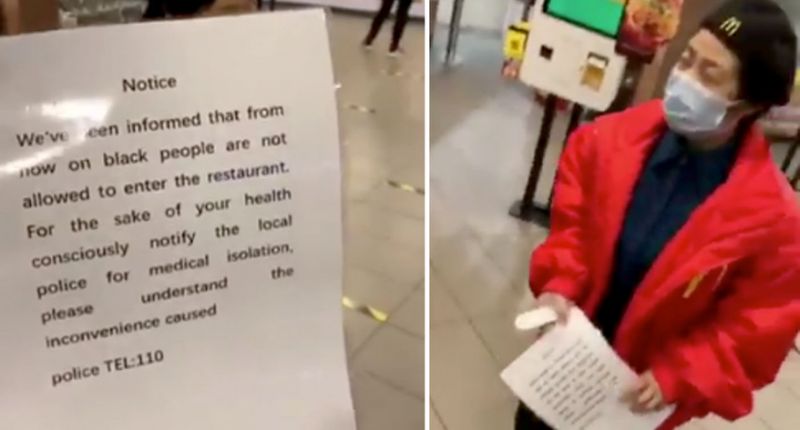 China needs to fix up.

McDonald’s has temporarily closed a branch in Guangzhou, China after it banned black customers, because a few Africans in the city had tested positive for coronavirus.

According to Honk Kong Free Press, the southern city’s African population has had to endure forced evictions, quarantines and mass testing in recent weeks, as though they think coronavirus came from Africa or something.

Again, for those who still doubt that Black people and particularly #AfricansinChina are being targeted we feel it is our duty to share this. A sign at a @McDonalds restaurant seems to make this perfectly clear pic.twitter.com/FaveKrdQHi

A bunch of people were calling this clip ‘fake news’ on Twitter because the sign is in English. Well obviously it’s in English because it’s directed at foreigners in China, most of whom can’t read Chinese. Duh?

Not to mention McDonald’s has come out with an apology after shutting the branch down:

As part of the temporary closure of this restaurant, we will take the opportunity to further educate managers and employees on our values, which includes serving all members of the communities in which we operate.

It’s amazing with all the advancements in technology and infrastructure in China, they’re still backwards enough to do something like ban an entire race of people from McDonald’s. You’ve got to feel bad for all the decent Chinese folk out there who are made to look bad by the minority of ignorant idiots who have enough influence to pull stunts like this.

Remember when China aired this advert and didn’t realise it was racist until it caused international outrage? Lol:

Really puts things in perspective when you’ve got people who complain about racism in the UK and US, for example. Obviously we can 100% improve racism in our own countries, but what minorities have to put up with in countries like China is just mind-boggling. Fair play to McDonald’s HQ for stepping in but it’s just surreal that this even happened in the first place.

For the leaked clip of Tiger King’s Joe Exotic complaining that he can’t say the N-word, click HERE.