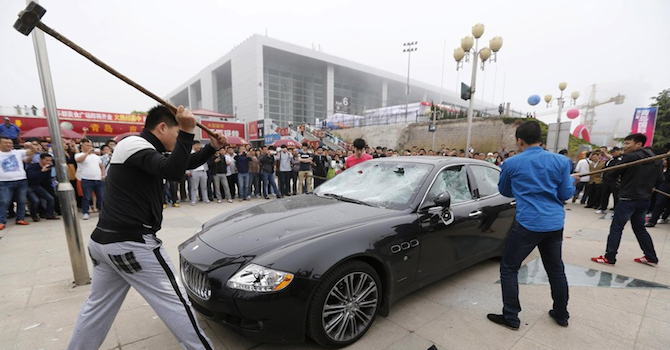 Some Chinese guy was pissed at the manufacturer who sold him his car so he smashed it up outside their offices as people watched in bemusement.

We’ve got some ‘sticking it to the man’ this week outside the Qingdao International Automobile Exhibition in Qingdao, Shandong province. One of the guys smashing this Maserati said the car owner had asked them to destroy the car, which costs around 2,600,000 yuan (about £227K), in protest against bad after sales service provided by the dealership. Apparently the garage had charged the owner the price of a new part despite repairing the Maserati with an old part, the sly bastards.

Now I don’t know about you, but if I’d been given the task of taking a sledgehammer to a supercar I’d probably go about it with a bit more gusto that this lot. I mean, this photo could be misleading, but it looks like the guy in the blue shirt is either suffering from hemorrhoids or it’s just his style to vent sledgehammering fury with all the mobility of a flat-pack wardrobe. The other three look bored to fuck too.

So this got me thinking if Maserati would actually be bothered by the stunt and the swift conclusion was probably not. Sure, it’d probably scare off somebody coming for a job interview but it’s hardly front-page material. Clarkson will probably make a shit joke about it on Top Gear and every fifty-something experiencing a mid-life crisis will go out and buy one of these cars.

Props to the guy who did it though, he’s evidently got cash to piss away if he can afford to royally fuck up his car purely for the sake of customer rights. I’m sure the Maserati bigwigs are having plenty of sleepless nights thinking about how NOT TO REIMBURSE HIM FOR WRECKING HIS OWN CAR.

Chances are you know someone who’s had to return their latest gadget to Apple as something’s gone tits-up with it and the greasy teenager in the store wouldn’t honour the guarantee.

Now if you had the bank-balance you could do some crazy shit like stand outside Apple HQ dressed as the ghost of Steve Jobs whilst lobbing iPads into a cement-mixer but you’d probably be taken away by men in white coats and locked up. Apple would then turn your little stunt into some snot-nosed viral marketing campaign and shift ten million more fucking iPads rendering your efforts futile and rubber-stamping the notion that the big guy always wins.

I guess what I’m getting at it is that any publicity is good publicity so you should probably just write them an angry letter.

Better still, if you’ve got this kind of cash to burn why not hire a computer genius to hack the company’s Twitter and make them look like complete goons, a move that’s far more likely to grind their gears considering social media has now overtaken reality as the primary realm of discussion.

â˜› Read this: Anonymous Hack Burger King’s Twitter And Turn It Into McDonald’s

Amazingly, this isn’t the first time this has happened in China. A couple of years back another millionaire tycoon wrecked an even nicer car over a similar disagreement. Check out this video which sounds like it’s from a Russian newsroom, wherever the origin they apparently don’t pause for breath over there which sounds pretty exhausting but each to their own. See if you can work out the point of it all – to be honest I’m struggling.

â˜› Next: Chinese Bus Driver’s Amazing Reactions As A Lamp Post Smashes Through His Windscreen And Nearly Decapitates Him