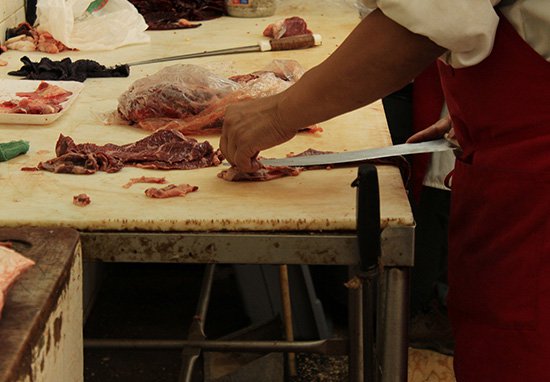 It’s often said that there’s nothing worse than serving meat to a vegetarian, but the guy in this story has proved that there actually is something way worse – serving them human flesh.

We’re over in Bangkok for this one at a vegetarian restaurant in the Eastern district over there. Customers thought that they were being served meat and so called the police in to investigate but they unfortunately discovered something far more sinister. When they entered the kitchen they discovered the walls and tables covered in blood and bits of human scalp and flesh were found on the floor.

Upon further investigation, the police discovered the decomposing body of a 61 year old man in a septic tank outside the restaurant and posited that the boss of the restaurant must have served chunks of his flesh to customers. The boss has been on the run since this discovery and is the prime suspect in the murder – it’s said that he was friends with the victim and the pair often drank at the restaurant together.

It’s not yet known what caused the restaurant owner to murder him or why he then decided to serve his flesh to the customers at his vegetarian restaurant, but you’ve gotta think he maybe had a psychotic breakdown or screwed his girlfriend or something. That’s some seriously messed up behaviour. Hopefully they’ll find him sooner rather than later and he’ll explain his actions, but I’ve kinda got a feeling he’ll probably turn up dead as opposed to alive. We’ll see.

For more of the same, check out this 21 year old revealing what it was like to eat his 45 year old lover. Yummy.