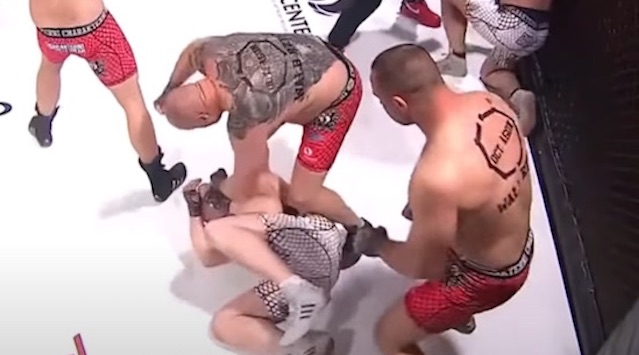 As MMA and Bare Knuckle Boxing gets more and more popular, it’s inevitable that you’re going to see some more extreme and wild versions of events and that’s exactly what we’re seeing below in what’s being billed as a six man tornado tag MMA match but is more accurately described as a 3 V 3 hooligan style fight.

I don’t really know where this is coming out from but I’ll probably hazard a guess as Poland or Russia or somewhere like that – it has to be, right?  Anyway, make sure you watch this with the commentary on and full screen it because there’s a lot going on and it really will make you laugh:

Lol. I love how the commentator has absolutely no clue what’s going on and also how he keeps calling that one guy ‘tattoo pappi’ all the way through the fight as well – that’s a sick nickname.

Anyway the fight was great and some of the tactical analysis in the replays from the commentator was a lot of fun too. Hope to see more of this in the future because it really was a lot of fun. Also love the way that all the fighters seem to have the sponsors tattooed/stickered to their skin or something?

For more of the same, check out this MMA fighter’s cauliflower ear explode in a fountain of blood mid fight. That looks like it hurt as well.