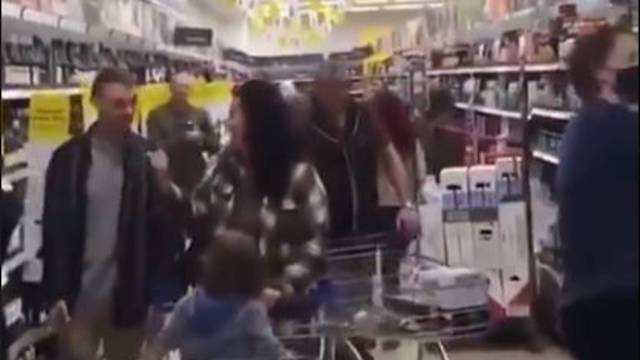 Lockdown restrictions started to ease in this country on Monday, but it seemed like it was a completely different world in Chelmsford where a bunch of anti-maskers were filmed wandering around their local Tesco without a care in the world and oblivious to the fact that they could still be contracting and spreading Coronavirus.

The footage was captured on Saturday March 27th – so even before the lockdown restrictions were lifted, natch – by the Twitter account Lawyers For Liberty who described it as ‘a perfect way to peacefully protest while buying your weekly groceries’. Take a look at the video below:

Obviously the comments are out of control on this one, with a fairly even split of people saying that they’re absolute heroes for organising this and those arguing that their actions are beyond contemptible. Doubt we’re going to get anywhere there, but Essex Police did issue the following statement to explain what happened to them after the protest:

We were called to Tesco in Princes Road, Chelmsford, just after 12.30pm on Saturday 27 March, following a report of a large group of around 20-30 people entering the store together and not wearing masks. When asked by staff to wear masks, they refused.

They left the store several minutes later and, when our officers arrived on scene, the group were in the car park.

We engaged with them and encouraged them to leave the area. Enforcement is a last resort for our officers, but one man was issued with a fixed penalty notice and a ticket for driving whilst using a mobile phone.

No further concerns were raised and the group left the area.

Well, it sounds like they weren’t complete and utter dickheads about the whole thing and it only went on for a short while, but even so I don’t get why it was such an effort for them to put a mask on for all of 25 minutes to do their weekly shop? Is it really so hard, especially when it seems like we’re nearing the end of the pandemic? Hopefully I don’t have to post too many more of these dumbass videos in the future.

For more of the same, check out this anti masker destroying a shop and assaulting the shop keeper when he was asked to leave. Some people hey?