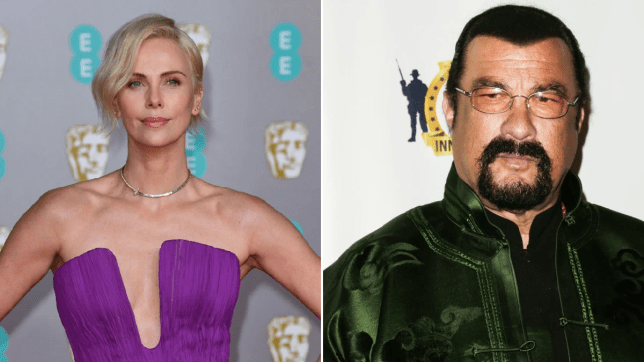 Not sure if I ever thought that Charlize Theron and Steven Segal was the celebrity beef that I needed, but 2020 has been a strange year so I’m totally here for it.

Charlize was talking to Howard Stern about her roles in action movies and for some reason just decided to go in on Steven Segal – here’s what she had to say:

At night I’ll go online to watch fighters or watch people fight and you always come across that odd Seagal video of him “fighting” in Japan, but he really isn’t.

He’s overweight and can barely fight… look it up, it’s ridiculous.

He’s shoving people by the face, it’s a whole setup.

I feel OK slamming him because he’s not very nice to women.

I mean let me tell you this – I’ve watched a lot of videos of people fighting on the internet and I’ve never come across this video of Steven Segal fighting in Japan. I’ve never even heard of it and it’s sorta my job to know this kinda shit.

Anyway, regardless of that I’ve watched the video and it is kind of lame and I’ve got not problem with Charlize ripping into him because it’s well documented that he’s a complete creep to women as well. Have to see how he reacts though.

For more of the same, check out when he was deemed too dangerous to enter the Ukraine. That was a weird time for everyone involved.