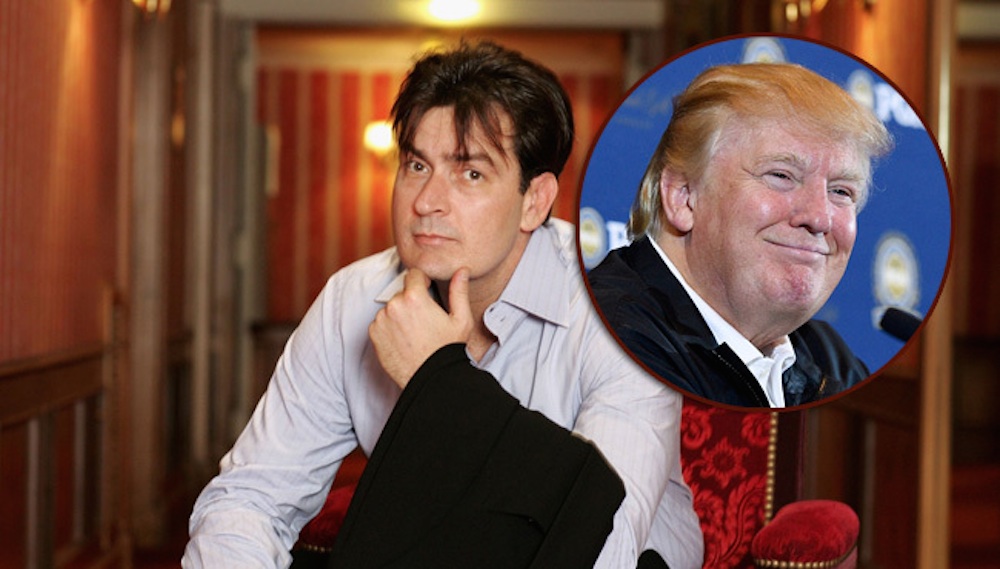 A match made in heaven?

There aren’t many things worse than Donald Trump running for President and the possibility that he might actually make the cut, but one of them might be if he brought Charlie Sheen along with him. Can you imagine those two idiots in office together, gakked up to their eyeballs spouting out nonsense every day? I suppose it might be kind of entertaining, but so was George W. Bush’s presidency and well, the less said about that the better.

Charlie Sheen and Donald Trump probably won’t end up actually happening (although it might considering how dumb Donald Trump seems to be) but that won’t be through a lack of effort on Sheen’s part. And it all started from a very unlikely source: Owen Wilson.

Owen Wilson recently likened Trump’s campaign tactics to the infamous meltdown that got Charlie Sheen fired from Two And A Half Men, which in fairness it does kind of resemble:

It’s like when Charlie Sheen was doing that stuff–like, wow! He’s answering a question completely honestly, and in an entertaining way. You sort of feel he could be a character from Network.

Charlie Sheen took this as a compliment though, and immediately decided to declare that he would like to be Trump’s running mate via his Twitter account:

dear
O. Wilson
they took ur comment
out of context!
I'm honored!
thank u!
If Trump will hv me
I'd be his VP
in a heartbeat!
©#TrumpSheen16

Well, there you have it. Although there’s likely no way that this will happen, you’ve got to admit that having Charlie Sheen on your ticket would probably lead to a lot more votes because everyone in America is an idiot, but it would make the political system more of a joke than it already is. Charlie Sheen would also probably have to explain this tweet he sent a couple of months ago:

Hmm. I guess Sheen can maybe be counted amongst the voters who are slowly being won over by Trump’s ridiculous attitude? Let’s hope this stops here as although it could be entertaining, it would most likely lead to the end of the world. In which case, prepare for it by making sure you have these essential items.