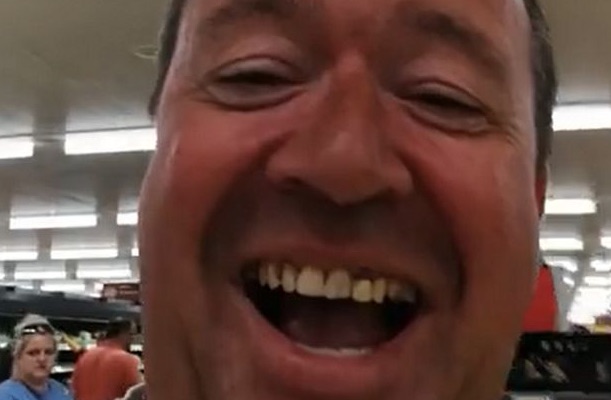 We’ll all admit that playing pranks on people is pretty goddamn funny, but I think when you’re a 46 year old man making a grown woman read out a slightly lewd phrase over a tannoy in a supermarket you really do need to take a look at yourself.

What makes this story even more ridiculous is that the culprit is apparently Charles Bronson’s son. George Bamby-Salvador apparently had a DNA test a few years ago that proved he was Bronson’s long lost son but he seems like such an idiot that nobody really believes what he’s saying.

Anyway, here he is talking about his hilarious prank along with the accompanying video:

I’m a bit of a nightmare for winding people up.

What happened is that it was my son’s 18th birthday the next day and my wife asked me to go into Sainsbury’s and pick up a birthday card for him.

So I went in and I’d seen this car registration online and I thought it was quite funny – NE14 ABJ. So I thought I could have a laugh with it.

I wrote the number down, went up to the counter, gave her the reg number and she read it out, and as it happened I absolutely pissed myself.

Then the security came over and they were all laughing. But they asked me to leave the store.

I was literally on the floor laughing. They had to pick me up – and they were pissing themselves as well – and that was it.

I went home and I said to the missus, ‘you’ll never guess what I’ve just done, have a look at this video’.

I showed her the video. She said ‘that’s all very good, did you get the birthday card?’.

And I went, ‘oh shit, I’ve forgotten’. So I had to go back and go back to Morrisons because I couldn’t go in Sainsbury’s because they actually banned me.

I mean this is literally a 46 year old man we’re talking about playing the kind of jokes that a thirteen year old wouldn’t find that funny and making himself absolutely crease over them. I guess it’s cool that he knows how to amuse himself but sometimes you’ve gotta take a look at yourself haven’t you? Awful.

For more Charles Bronson, check out the pictures from his wedding reception last year. Weird.