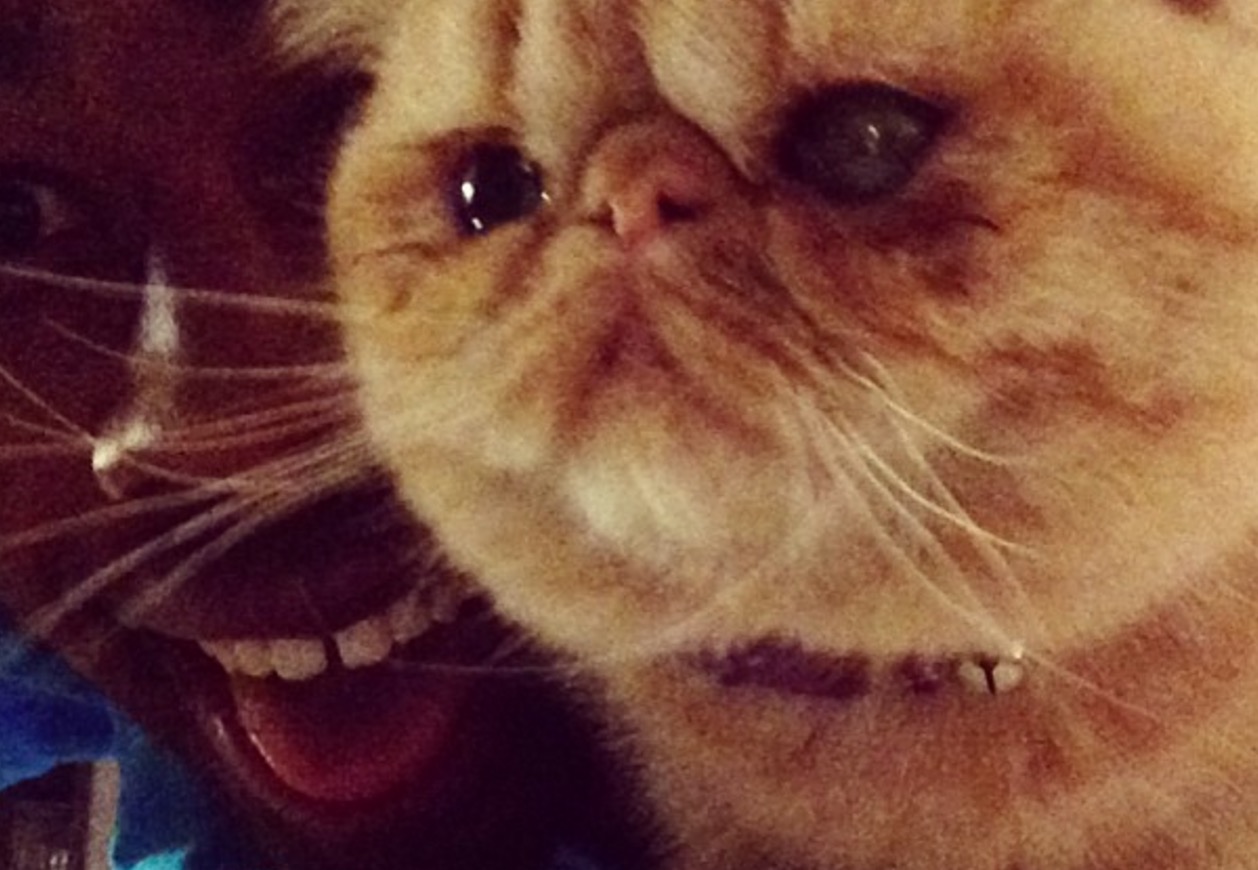 Because all the best people are cat people.

With the constant barrage of bad news – especially following the tragic Dallas sniper attacks last week – sometimes it’s just nice to bask in as many cute animal pictures as possible and remind ourselves that occasionally the world isn’t so bad.

Your thing may be snacking or drinking but my own personal go to comfort outlet are cat photos. Back when I lived with my parents, my cat would always help cheer me up when I felt down so I guess scrolling through endless kitty content it’s just like an online version of that.

With cats being the most common pet in the world, it’s no wonder many others feel the same about the purry pussy rascals. Even celebrities are fans of feline companions, with many stars owning multiple cats themselves. After feeling particularly groggy after a long lethargic day, I compiled this list of some celebrity cat companions for you guys to fawn over. Aww!

Detroit based rapper Danny Brown is a massive cat lover and owns two bengals named Siren and Chie. They’re pretty much the stars of his Instagram feed and he even Facetime calls them whilst he’s working away.

I love this girl and this girl alone. Lily White. A photo posted by Marilyn Manson (@marilynmanson) on Mar 8, 2016 at 4:35am PST

Lily White is Marilyn Manson’s very own Devon Rex who he won pet custody over after his messy divorce with ex-wife and burlesque dancer, Dita Von Teese. Manson has made various artworks devoted to this cat including two short films and a painting.

I feel like I just interrupted a very important conversation.

Taylor Swift is essentially the crazy cat lady of the celebrity world. Not only does she have two cats named after Grey’s Anatomy chracters – Doctor Meredith Grey and Detective Olivia Benson – but she’s fully obsessed with them. They even have their own personalised pet carrier cases.

Miley Cyrus has a extensive menagerie of pets that includes her kitty Keke. The singer reportedly adopted two kittens following the tragic death of her husky puppy Floyd who passed last year. Presumably they’re a feisty pair as she also uploaded a few Instagram posts where she was completely covered in cat scratches.

Extremlely rare photo of keke the adopted tabby cat and first animal of hip hop 2016!! Collect this and put as your avi if you only care Bout keke and your selfish with keke – lil b

Another celebrity cat named Keke. This time the kitty in question belongs to the based god and rapper Lil B. The adopted tabby even has his own track that even impressed Pitchfork.

Would never have pegged Macklemore as a cat man but I’ve been proven wrong. The singer actually has a super cute tabby cat named Cairo that even has it’s own Instagram account.

Years and Years frontman Olly Alexander has his own feline companion named Stewie. If you follow the singer on Instagram then you’ll notice this grey fuzzy friend gets featured quite often, my own personal favourite photo is the one where he has his head in a glass of water.

The comedian and activist Russell Brand is famously a proud cat lover. His own cat Morrissey was named after The Smiths frontman who was also majorly fond of the feline folk himself.

A one month year old tabby kitten was heroically saved from being put down by the singer Ed Sheeran back in 2014. The cat was named Graham and presumably has been spoilt by the artist who initially bought him a bed and lots of snacks. Would’ve thought he’d have a ginger cat to be honest but that’s just me.

Blonde bombshell Rita Ora is another celebrity cat lady and her many Instagram uploads of Bruno the cat proves it. Very cute!

Whilst Tyler The Creator is indeed a huge fan of cats, he is actually seen posing here with Justin Bieber’s ginger cat Tuts. I really appreciate how squishy his face looks (the cat not Tyler…)

Singer and celebrity offspring Willow Smith apparently had a go at her Dad after he accidentally let one of her precious cats out after stupidly leaving the door open. No word on if it’s this one she took a photo of on her Instagram but this snuggly one is still adorable.

Just found this little pickle sharpening her claws on my handbag!!! 🙈❤️ A photo posted by Holly Willoughby (@hollywilloughby) on Apr 30, 2016 at 11:50pm PDT

Holly Willoughby is a proud cat mum of this ragdoll kitty named Roxy. Apparently the fluffy friend predicted the television presenter’s last pregnancy back in 2013 after they were visited by a professional clairvoyant, spooky.

Cats aren’t doing it for you? Then check out the world of Dogspotting.