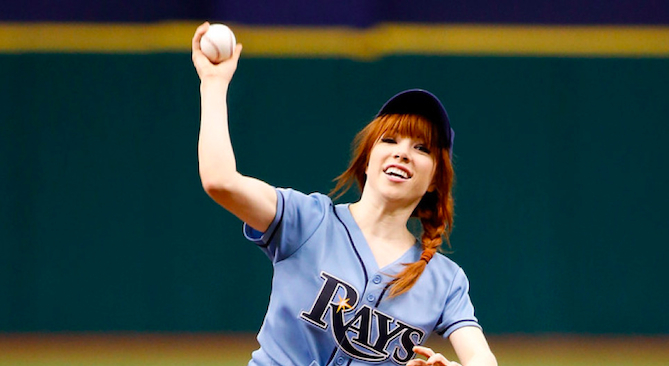 It’s crazy to think that it’s over a year since Call Me Maybe came out and became one of the biggest hits of last summer. Everyone thought I was joking when I wrote an article about how much I liked it and how it seemed destined to be one of the major hits of the summer, but man I’m not gonna lie I was serious and I stand by that now – it’s just such a catchy little song. I’m pretty sure in that article I said that it had one hit wonder written all over it too, and well, a year later it doesn’t seem like Carly Rae Jepsen has done much else so I guess I was right about that. In fact to be honest I’d pretty much forgotten she even existed.

That is until now. I don’t know if anyone reading this knows too much about baseball but it’s a tradition over in the States (and probably the rest of the world too) that before every baseball game a celebrity or local hero or someone of that ilk throw out the first pitch to get the game going. Normally this isn’t that big a deal and the celebrity throws it out without much trouble and then they receive a round of applause and the game gets going.

However, this wasn’t the case at all when Carly Rae Jepsen stepped up to the mound in the Tampa Bay Rays game against the Houston Astros on Sunday. She stepped up and did one of the worst baseball opening pitches of all time, with the ball barely travelling about two feet before it hit the ground. I guess it is true that girls just cannot throw at all. Embarrassing.

Woman Gets Dropkicked At Baseball Game

Baseball Fan Catches Baseball In His Beer And Then Downs It