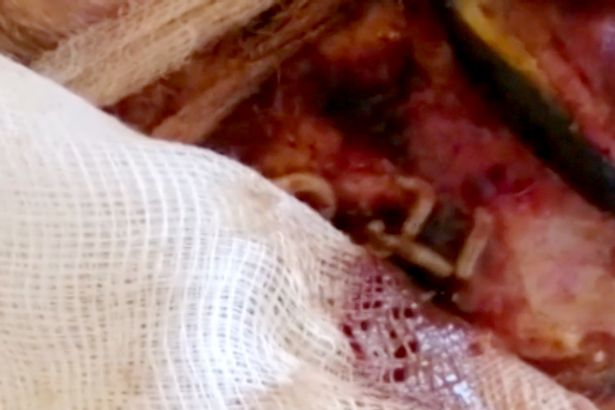 Not what you want to be seeing from inside a hospital.

Over in Bucharest, their Emergency Hospital for Plastic Surgery and Burns has been forced to close one of its wards after a video emerged of a burns victim recovering there being literally eaten alive by maggots. Disgusting.

Here’s what the anonymous medic who took the video and leaked it to the media said about it:

There are people who have been admitted to the Burns Unit 10-11 days ago.

They were brought directly to us. Considering that the unit is full of flies, the things we see in the video are, most likely, fly larvae.

Răzvan Luțac, a journalist for Gazeta Sporturilor who broke the story, developed it further:

What you see there are not medical maggots.

This is a part of a biggest investigation started by Gazeta Sporturilor, showing the reality from our hospitals.

We started it after the Colectiv nightclub fire from 30th October 2015.

A lot of young lads died after a fire in a Bucharest nightclub, but, after some days, a doctor from the same hospital told us that a lot of them passed away not because of the burns, but because of the hospital infections.

We also discovered that Hexi Pharma, the main producer of disinfectants in Romania, diluted its products.

A lot of doctors told us that this is the main reason why our hospitals are full of infections. After a month, the boss of Hexi Pharma, Dan Condrea, committed suicide.

Sounds like some kind of a conspiracy going on over there. Maybe they’ll make a movie about it? The whole situation got even more mysterious with the statement from the hospital, who acknowledged that the guy in the video had died but said it was nothing to do with the fact that maggots were eating him.

Let me start by telling you how much I regret the situation of the burn hospital patient.

The guilty will be held accountable. The Bucharest Police is already there. We cannot blame the entire medical staff. It’s the only hospital where we have great burn specialists.

They cannot be blamed en masse. As long as you don’t have an air conditioning system, as long as you have windows without insect screens and you have flies, you have a major problem.

Sounds like there is a distinct lack of resources over there, but it probably isn’t helping the situation too much that those guys are diluting their disinfectant either. Hopefully this video helps to get them to install some goddamn air conditioning or insect screens in their hospitals so nobody has to be eaten alive by maggots when they’re supposed be getting looked after again.

For more maggots – although hopefully you’ve had your fix – check out this video of them eating a live man’s brain. Absolutely rank.