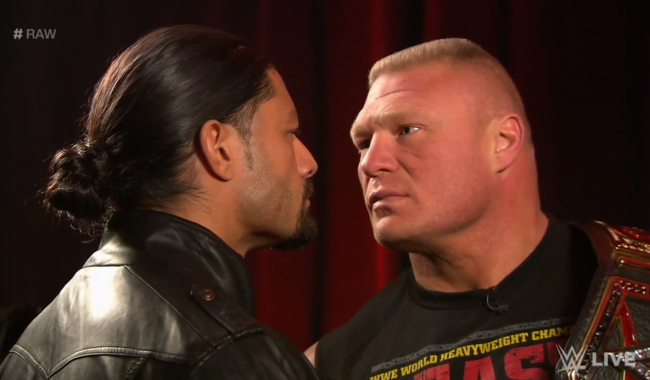 Is Roman Reigns is in for the battering of a lifetime.

Turns out even God isn’t happy with Roman Reigns winning the Royal Rumble, because he caused a snow storm that meant the WWE crew had to cancel Monday Night Raw last night.

Instead they aired a bunch of live interviews including this awesome face-to-face controntation between Brock Lesnar and Roman Reigns with Paul Heyman overseeing it and giving a wicked reminder of Roman’s family history in the business, which suddenly makes him seem like an actual contender.

It doesn’t make what happened at the Rumble right, but it does offer some hope that maybe Brock Lesnar beating the shit out of Roman Reigns at Wrestlemania might be worth watching:

Click here for a great supercut of pro wrestlers having conversations during matches.