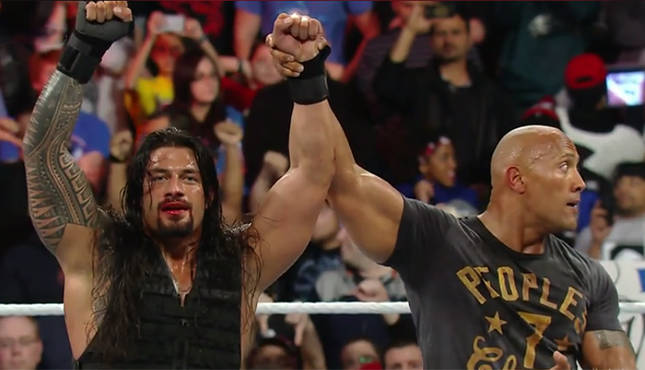 One of the most disgraceful nights in pro wrestling history.

If you watched the Royal Rumble last night, then you already know. Last night was the worst ending in pro wrestling histo…. Oh wait, what’s that? Deja vu? We wrote this exact same blog one year ago after Batista won the Royal Rumble and Daniel Bryan wasn’t even in it.

This year, Daniel Bryan was in it but got eliminated halfway through. Everyone wondered WTF was going on. They then completely cocked up what’s meant to be the best wrestling show of the year by having Roman Reigns win and it was so predictable and shit that even TIME magazine has picked up on what a disaster it was.

So yeah, Roman Reigns wins and gets drowned in boos, which is what everyone (except the people writing this shit) knew was going to happen. It was supposed to be his special moment but the crowd just took a giant dump on it. They even brought out The Rock to help neuter the boos but that only worked for about 5 seconds, and you can see the “welp, this isn’t good” look on The Rock’s face as he’s standing there pretending to be happy that Reigns won.

So what happens now? Well, the WWE Network subscription page apparently crashed because so many people were trying to cancel their accounts. The whole thing is trending on Twitter because people just can’t believe the WWE writers made the same mistake two years in a row by not having Daniel Bryan win. Not only not having Daniel Bryan win, but having a guy who fans have made clear they’re not invested in yet win. Will they do something between now and Wrestlemania to fix it? Doesn’t look like they have a choice, but it still makes absolutely no sense that it happened in the first place.

A complete disgrace of a show. Still, at least we know that Seth Rollins is a total badass: