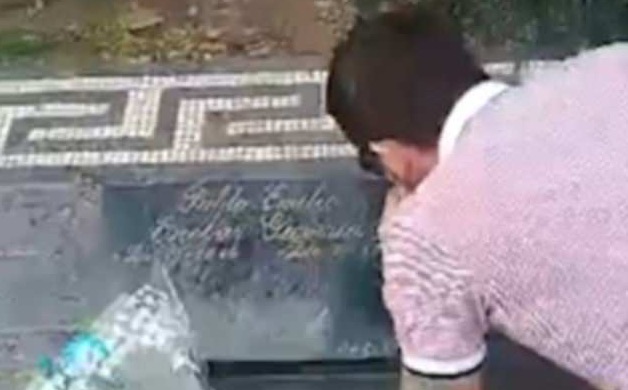 If you’re into snorting lines of cocaine, then there are a myriad of great locations to do this – off the toilet cistern, off a mirror, off a hooker’s back etc etc – but I think that the guy in this story has won the competition for the best of all time, hands down.

A British tourist named Steven Semmens thought that it would be a good idea to visit the grave of Pablo Escobar in Itagui, Colombia and – yep, you guessed it – snort a line of cocaine off it. The video was then uploaded to Facebook, before it was quickly removed.

This being the internet though, of course somebody took a rip of it and you can see it below:

Funny guy, although he’s almost certainly going to lose his job over this now that it’s going viral. You would really think that people would be smarter about these things these days, but I guess not. So it goes.

Obviously there are going to be some people out there saying that it’s disrespectful doing lines of blow off of someone’s grave and whilst there is some truth to this, I’ve gotta say I think it’s a fitting tribute to the legendary drug dealer and he probably would have given the video his blessing.

Not so sure about his kids and the cartels now though, so Steven probably has a couple of other things to worry about before he faces the music from his friends, family and colleagues. Like getting out of Colombia alive – good luck pal.