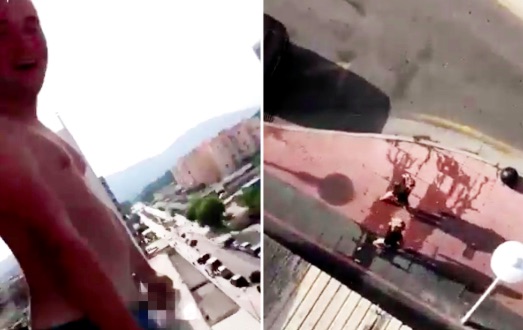 The Spanish resort of Magaluf has gone from being a sleepy beachside town to a place of binge-drinking, STDs and straight-up carnage thanks to the influx of Brits flocking to the area each year to party on the cheap.

Personally I’ve never been and I don’t intend to so long as it’s infiltrated by boozed-up Brits abroad. Why? Because of dirtbags like the one in this video.

The unnamed man can be seen pissing off of his hotel room balcony as his pal eggs him on to shower the people below. Who is raising these monsters?

At first it looks like the guy is just enjoying the view, but as soon as the camera pans down you can see he has his dick out, causing the two friends to piss themselves laughing… literally.

The footage was uploaded by a guy called Thomas Boddy, who wrote:

When you go to Magaluf for some sun but instead you get p***** on.

Grimy. You’ve got to feel bad for the people below – no doubt they went straight home and threw their clothes in the incinerator.

Hopefully the government hurries up with their plans to ban the people like the one in this video. In the meantime, sit tight Magaluf residents – our hearts go out to you.