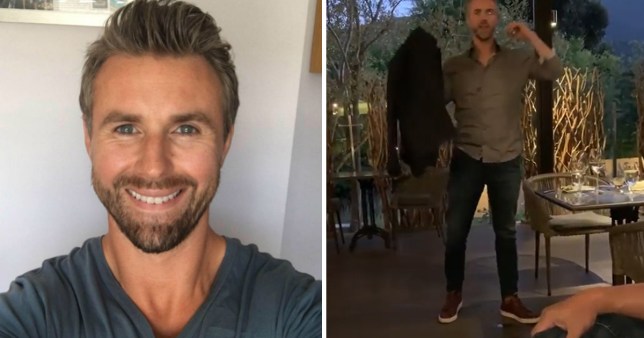 Another day and another video of someone being massively racist for literally no reason, this time with the honour going to a British CEO of a Silicon Valley company named Michael Lofthouse.

Lofthouse was eating at the Bernadus Lodge and Spa’s Lucia restaurant in Carmel Valley, California on Saturday evening when he was disturbed by an Asian family singing happy birthday to one of their members. Not really sure why that would annoy him so much, but it then appears that there was then an altercation between Lofthouse and the family, which caused him to stand up and hurl some racist abuse at them which can be seen in the video below:

❗️❗️❗️SHARE THIS POST❗️❗️❗️ Trigger warning: Racism, Vulgar Language (FYI he had a LOT more to say after I stopped recording) This is the face of the man who relentlessly harassed my family and I completely UNPROVOKED, UNWARRANTED, and UNCONSCIONABLE. We were celebrating my tita’s birthday, literally just singing happy birthday to her and taking pictures, when this white supremacist starts yelling disgusting racist remarks at us. (“Fuck you Asians” “Go back to whatever fucking Asian country you’re from” “You don’t belong here”) It is no coincidence that this man has the audacity to showcase such blatant racism on the 4th of July. White supremacy has a notorious habit of masquerading as patriotism! The fact that Donald Trump is our president (i.e. THE MOST POWERFUL MAN IN THE WORLD) gives racists a platform and amplifies voices of hate. The surfacing of racists is so prevalent right now, even in such an ethnically/culturally diverse and liberal state like California, because Trump HIMSELF uses his position to incite racial tension and to promote aggression towards POC, foreigners, and immigrants. We need change! PLEASE PLEASE PLEASE VOTE THIS UPCOMING RE-ELECTION. PROTECT ALL PEOPLE REGARDLESS OF SKIN COLOR AND ETHNIC ORIGIN. ✊🏻✊🏼✊🏽✊🏾✊🏿

Geez. Whenever a video about someone getting so angry about something so mundane gets posted I wonder how something like a birthday party can trigger them so badly into going into full on racist mode and this time is no exception. What happened to Michael Lofthouse that has loaded him up so full of hate?

Apparently not THAT much because he posted the following grovelling statement about his actions shortly after the post went viral and everyone started condemning him for his behaviour:

My behavior in the video is appalling. This was clearly a moment where I lost control and made incredibly hurtful and divisive comments.

I would like to deeply apologize to the Chan family. I can only imagine the stress and pain they feel. I was taught to respect people of all races, and I will take the time to reflect on my actions and work to better understand the inequality that so many of those around me face every day.’

I mean I suppose he is at least owning his actions there, but it doesn’t exactly sound like the kind of statement that implies that he’s going to change his ways or do anything about it in the future. In any case, if you’re acting and saying stuff like this it’s indicative of some deep level of hatred and problems that aren’t going to go away overnight. Not really sure how he could sort out those issues except maybe with a lot of therapy or self care or something.

In any case, it seems like the Twitter army may have spoken and moved to cancel Lofthouse and his corporation, so he might be paying the consequences of his actions now anyway. We’ll see if we hear anything from him in the future, but I imagine right now he’s just trying to slink into anonymity and recover from the backlash he’s facing.

For more of the same, check out this white ‘anti racist’ assaulting a black man for removing BLM signs. Confusing.