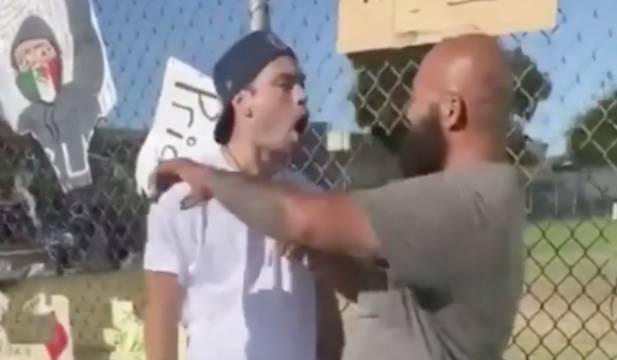 You know we live in fascinating times when a white ‘anti-racist’ can attack a black man for taking down Black Lives Matter signs across the road from his house, while screaming at him that this is “my block” and that he should go home or get beaten up in front of his kids.

You could honestly write a whole PhD on this video:

White “anti-racist” racist watched by others assaults a black man removing BLM signs. Screams “go home” & this is my block & threatens to beat him in front of his children. Today’s anti-racists act pretty damn racist. pic.twitter.com/ks8dkKGuVJ

So it looks like the black homeowner was tired of looking at the mess of signs across his street and so took it upon himself to take them down, only for this white guy to freak out and attack him for it. Fair play to the man for keeping his cool in front of his kids who were waiting in the car but I can’t lie – it would have been incredibly satisfying to see that loudmouth getting decked.

Doesn’t even matter whose side of the argument you’re on, his attitude and the way he bullied that man off the street is just bang out of order. I mean what kind of person threatens another man in front of his kids? One day he’s going to try that flop of a rugby tackle on the wrong person and won’t be getting back up – guaranteed.

For the man who took a “Fuck BLM” sign into the Black Lives Matter protests and caught a beatdown for his troubles, click HERE. What did he think was going to happen?