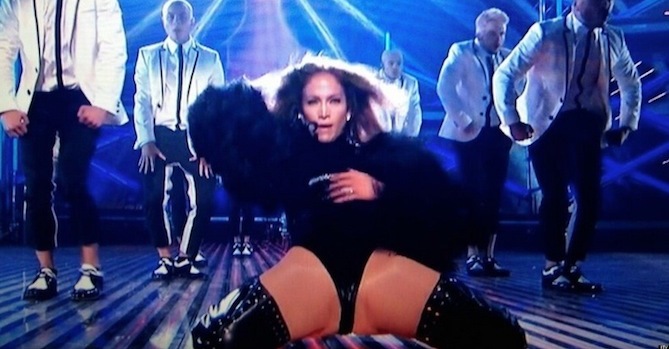 Hundreds of people complained about Jennifer Lopez’s ‘raunchy’ performance on BGT last week. Is Britain a nation of pansies or was J-Lo’s performance actually too sexual for prime time TV?

Let’s acknowledge that J-Lo is still looking mighty fine at 43. She’s never been in my own personal top 5 or anything but it’s not exactly breaking news to say she’s always looked good on stage and in music videos and is overall pretty impressive as a performer.

Secondly, the issue at hand; why must we be such a nation of pussies when it comes to ‘raunchy’ musical performances?  England —Europe in general — is supposed to be relatively advanced when it comes to sex and nudity and that kinda stuff. Look across most cities in the UK; how many massive billboards do you see with hot girls frolicking around in their underwear? What about David Beckham’s ball bags lighting up the central London skyline a couple years ago? Why is everyone okay with that and yet we shit ourselves when Jennifer Lopez wears a relatively conservative leather one piece and thigh high boots?

Watch the video, it’s just not a big deal. I mean the part when she gets on her knees and her legs spread out and her vagina ends up in the cameraman’s face, okay, that’s a bit much. If this were a 3D broadcast I’d understand your grievances. Plus the bit where she lays on her back and does an open-close clap with her legs, that’s kind of what strippers do but other than that, this performance is entirely PG and completely harmless.  Stop wasting everyone’s time by calling in and complaining about prime time TV shows, you’re only getting more people to watch.